An eagle-eyed member of the local community has noticed that the licence that allows the hoarding surrounding the Tribeca Square site - formerly known as Oakmayne Plaza, formerly known as the Volvo garage - has expired. Perhaps the licence has since been renewed, but the hoarding stretching from the New Kent road down Elephant road to the Walworth road, has been a great nuisance and inconvenience to pedestrians since 2006. After a spurt of on-site activity in 2009 progress has halted.

Oakmayne Director, Martin Lent has recently said that Oakmayne intends to return to Southwark planning to ‘tweak’ their application before work re-commences. What this means remains to be seen: the original application was comprehensively tweaked so that no affordable housing would sully the development. In return, Oakmayne was going to build a huge basement, which was to house the MUSCo ‘subterranean servicing complex’ between the Heygate and the shopping centre. Now that the MUSCo has been ditched, there will be plenty of room for some affordable housing in the development - even if it is in the basement.

An FOI request refused by Southwark Council over a year ago, has now been partially conceded. The request asked for the viability assessment for the Heygate masterplan application, and was referred to the Information Commissioner after Southwark’s refusal. The Commissioner has now said that Southwark is willing to release some of the information requested. We don’t know how much and how useful this information will be, but we are looking forward to seeing it.

Developers use viability assessments to relieve themselves of the obligation to provide affordable housing. They are supposed to be objective but in fact are highly contested, as this extract from the GLA report for the aforementioned Oakmayne development from 2007 shows:

Councillors on Southwark’s planning committee - the people who actually take the decisions - are not allowed to see viability assessments, despite their critical importance. This is not the case in all boroughs: some like Haringey and Lewisham allow councillors to view them, albeit with certain conditions. Whatever information we will receive, we will be more than happy to share.

The Heygate estate development is to be re-phased. The next two phases were due to comprise 1940 homes on the main site north of Heygate street adjoining the Oakmayne site and shopping centre. The next phase is now to be of 360 homes on the south side of Heygate street site adjoining Wansey street. This is welcome to Wansey street residents, who will see that part of the development completed first rather than last within the 15 year scheduled development cycle. It might also make better commercial sense for Lend Lease to hold off from the main development, given the uncertainty surrounding the shopping centre and Oakmayne developments.

Consultation on the Wansey street phase has now begun and the planning application is expected to be submitted in September. 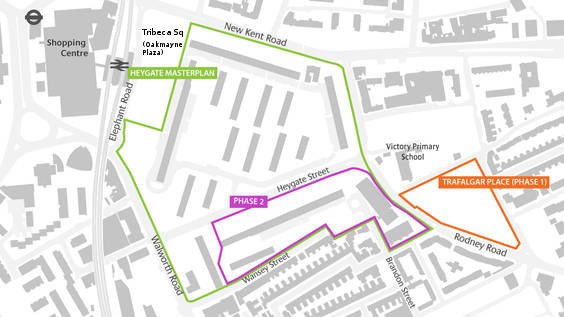 Southwark’s Liberal Democrat opposition has called for the Compulsory Purchase of the shopping centre. This is a possibility we raised in our previous blog post, but there is little doubt that the owners of the shopping centre, St. Modwen would contest such an action vigorously and have the firepower to do so effectively. There is also the impact on the retailers and shopkeepers in the centre to be considered. On the other hand, Southwark council needs to be able to exert some sort of pressure on St Modwen, or otherwise the whole regeneration will be held hostage by them. St Modwen also needs to overcome its reluctance to engage with the wider community about its plans for the centre.

We note Cllr Fiona Colley’s comments on the SE1 website, and are happy that she is pushing for a better deal. But this is a conversation we should all be part of: what is the offer on the table from St Modwen? And what is it that Southwark is demanding from them?

“So far, in our discussions with St Modwen, we have not been presented with a plan for the shopping centre that we believe delivers the right solution for local people or the area especially concerning appropriate levels of affordable housing.” (Fiona Colley, Cabinet Member for Regeneration)