The Aylesbury CPO decision took a further twist this week when Southwark Council’s Overview and Scrutiny Committee ‘called-in’ the Cabinet’s decision to mount a legal challenge, which it will scrutinise on Monday evening. The committee only has the power to refer the decision back to Cabinet or Council Assembly for reconsideration and given the political majorities in these bodies, it is very unlikely that the decision to appeal will be reversed. However, the call-in shows the levels of disquiet at Southwark’s behaviour. The Aylesbury Leaseholders Group is also due to give evidence at the Scrutiny Committee meeting.

The committee has been briefed on the decision to seek leave for the appeal by Southwark’s ‘Director of Law Democracy’- Doreen Forrester-Brown and her briefing report has several interesting points.

First, it seems that the advice given in the report to the Cabinet meeting that took the decision to appeal was wrong in one important respect; ‘Recommendation 2(d)’ of the report misled the Cabinet committee to think that deciding to appeal was a matter for the Council; in fact the Cabinet was misinformed and it is instead a decision for someone called the ‘Monitoring Officer’ (see para 11 of the Doreen Forrester-Brown’s briefing).

The briefing report goes on to state ‘All matters not reserved to Council Assembly, Cabinet or for a committee for decision are delegated to the appropriate chief officer and/or head of service’ and ‘there was no requirement for Cabinet to take this decision’ (paras 13 & 15). So it appears that the decision to appeal against the refusal of the CPO is in fact not in the hands of our democratically elected members but in the hands of an unelected senior officer.

Second, having employed one QC, who lost them the case, Southwark has decided it needs to double-up and employ a second QC ‘of appropriate experience’ in its effort to reverse the decision. So it’s good news for FTB Chambers and others in the highly-paid legal profession and bad news for the hard-pressed Southwark Council tax payer.

Third, the future of the Aylesbury regeneration is now indeed in doubt. The briefing says that if the Secretary of State’s decision is not overturned then ‘it undoubtedly indicates a shift in focus that will be hugely difficult to accommodate within the context of scheme viability and deliverability’ - in simple language, Southwark won’t be able to deliver the estate’s regeneration if it has to pay leaseholders fair compensation for the loss of their homes.

The Council’s desperation is such that it has been led to accuse leaseholders of holding it to ransom. It says that ‘they are being offered market value plus ten percent’, but we have shown the kind of dirty tricks it gets up to in its determination of market value, such as using a one bedroom flat illegaly converted into four bedrooms as a comparison. These tricks have resulted in the Council getting away with making valuations as low as £75k for a 1-bed flat in 2012. 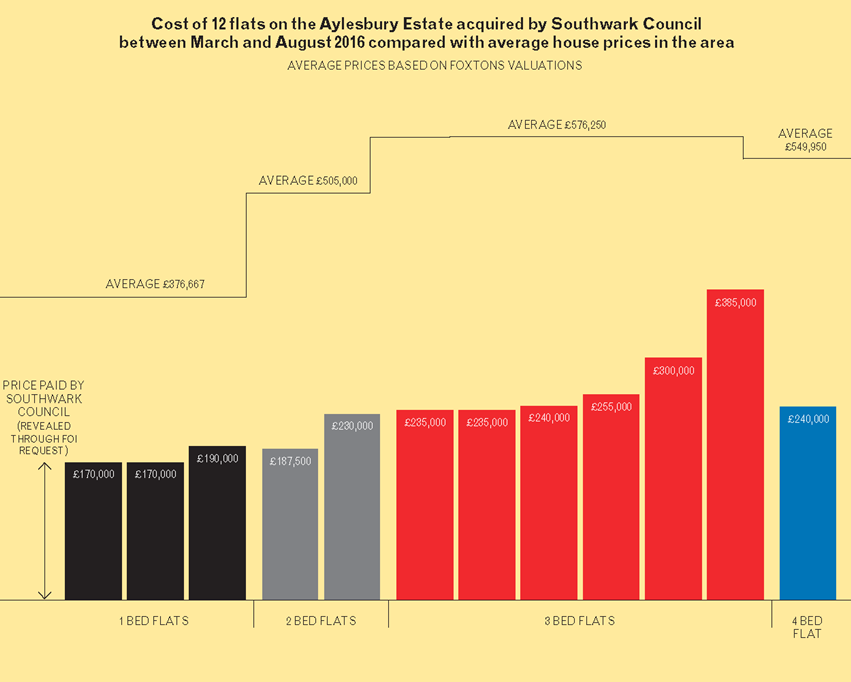 The Right to Remain

The significance of the Aylesbury CPO decision has led a number of law firms to publish their legal opinions. In this opinion from Herbert Smith Freehills the decision is heralded as a possible future ‘right to remain’ for council estate residents:

Herbert Smith Freehills are Southwark’s legal advisors for the Elephant & Castle regeneration, so Southwark should pay them particular heed.

Another opinion is from leading law firm Ashurst and is listed in Doreen Forrester-Brown’s briefing, but, given Southwark’s decision to appeal, the following paragraph appears to have been entirely ignored:

Both the manner in which Southwark has decided to appeal against the CPO decision and the decision itself begs some questions - who took the decision, the Cabinet or the mysterious Monitoring Officer? Why was the decision to appeal taken, when at least one respected legal opinion rates its chances of success so low? If Southwark has received any legal advice which says the appeal can succeed it should be made public. We think the Council should also answer the questions;

The Aylesbury regeneration is essentially a commercial development with the aim of building 1773 private homes to make Notting Hill Housing £163m in profit. Southwark’s part of the deal is to spend nearly £150m1 of public money and to demolish 2,249 council houses, replacing it with ‘affordable’ housing that is simply unaffordable to those who need it most. To any objective observer none of this makes any sense.

As we said in our last blog, Southwark should take this opportunity to call a halt to this misconceived regeneration and abandon what could be its futile and costly attempt to overturn the Secretary of State’s decision.

The Council has published its pre-action protocol claim stating that it is applying for judicial review to the High Court and outlining its grounds for appealing the decision. The letter is dated 7th October - 3 days before the decisionto appeal was to be called in for scrutiny..

A short clip showing the highlights of the scrutiny committee meeting has been posted online: