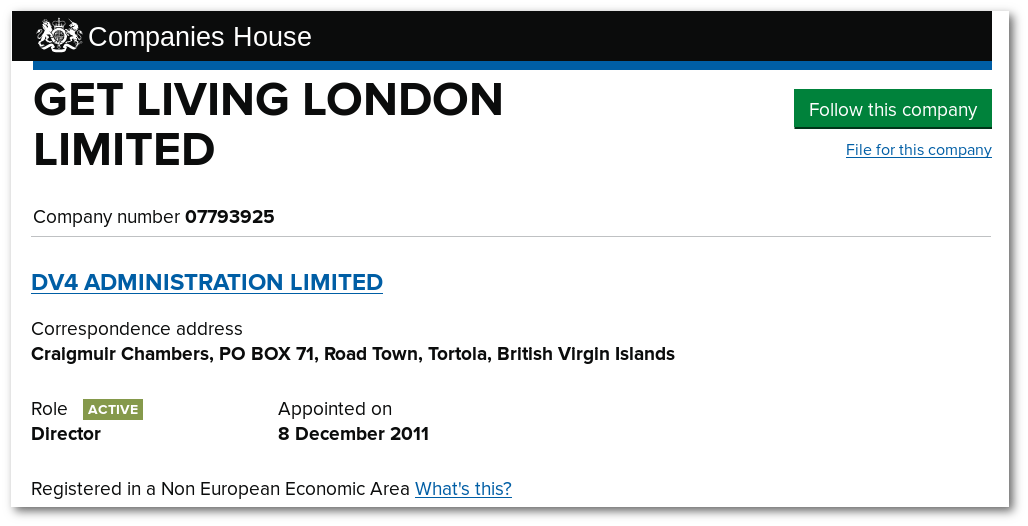 Get Living London - get lost HMRC

Our last blog reported how Delancey has shown great efficiency in its Elephant One development. Delancey and its development partner bought the site for £8m and then increased the purchase price to £18m by flipping it between companies. This was then used to help avoid £58.9m of planning contributions, including affordable housing. Along the way it gained half an acre of public land with which it was to provide a market square, but subsequently ditched the market.

We have also shown previously how Delancey, having bought the Elephant One land for just £8m, has used a network of offshore companies registered in Panama and Bermuda to avoid paying any corporation tax on developing the £200m scheme.

Land Registry deeds for Elephant One.

Delancey is now showing equal efficiency in managing its new housing at the Elephant. It will be using Get Living London Ltd, a company founded by Delancey’s offshore arm DV4 and Qatari Diar, as owner and manager of all 979 units proposed for the shopping centre, including the ‘affordable’ housing. Get Living London’s ultimate parent company based in BVI

Get Living London already manages the 646 dwellings in Elephant One, just next to the shopping centre and housing across both sites will be marketed as ‘South Village’. Elephant One includes 274 student rooms, which Get Living London is letting at rents of £279pw for a ‘Classic’ room, or £349pw for a ‘Supreme’. The remaining 372 ‘build-to-rent’ private rented units are being advertised starting at £1,841 per month for a 1-bed.

Over in Stratford Get Living London also lets just over 1400 private rented apartments at ‘East Village’, formerly the Olympic Village, with a further 2000 in the pipeline.

Despite this huge rental portfolio, valued at £1.4bn and further set to double its assets, Get Living London has not paid any corporation tax since it was incorporated in 2011, according to accounts filed at Companies House. This is because its two ‘ultimate parent’ companies are based offshore, one in Qatar and the other DV4, in the British Virgin Islands. DV4 is Delancey’s offshore arm that has been accused of ‘aggressive tax avoidance’ by the HMRC, as reported in Private Eye.

Delancey’s two developments comprising 1600 new homes for rent at the Elephant (aka ‘South Village’) are known in the industry as Build to Rent (BtR). With all the tax-free profit to be squeezed out of London’s burgeoning private rental sector, BtR is in vogue with London’s developers. BtR developments are 100% rental, with no homes for sale, backed up by large institutional investors and owned and managed by one (private) landlord.

BtR is also giving us a new kind of affordable housing - Discounted Market Rent (DMR). DMR is similiar to the much derided affordable rent and compares badly with social rent. Like affordable rent, DMR can be let at up to 80% market rent, but with a likely 3 year tenancy, and only remaining discounted for 15 years, before passing onto the free market. Social rent levels are largely based on local incomes, giving an equivalent of about 25% market rent in Southwark. Social rented housing still has lifetime tenancies and remains affordable in perpetuity.

It is therefore surprising (or maybe not) that Discounted Market Rent is viewed as the housing solution of the future by Southwark Council, Labour Mayor Sadiq Khan, Deputy Mayor James Murray and GLA Housing Chief Tom Copley.

Sadiq Khan is very enthusiastic about DMR; he has given it help and space to grow, by halving the amount of social rented housing he wants from developers in his draft affordable housing planning guidance1.

Delancey has taken full advantage of Mr Khan’s largesse and proposed no social rented housing in its redevelopment of the shopping centre and, if approved, their scheme will join another BtR development, the 360 Tower, just over the way at St Mary’s Park and built on land bought with £18m of public money, but also social housing free. We understand that the Mayor and his Labour Party colleagues are motivated by pragmatism. But while Build to Rent is supposedly a market-based solution to the housing crisis, drawing on institutional investment, it also depends upon a large amount of public money - £3.5bn, rising to £6.6bn, while social rented housing is starved of funds. We think that the Mayor should stop championing Build to Rent and start fighting to build social rented housing.

Build to Rent and Discounted Market Rent are designed to meet developers’ needs first and our housing needs second. We can help stop their roll-out across London and the further maginalisation of social rented housing by defeating Delancey’s plans for the Elephant and Castle shopping Centre; we have launched a campaign group to this end (www.uptheelephant.com). You can support us by lodging an objection or come to our public meeting tomorrow night at the shopping centre.