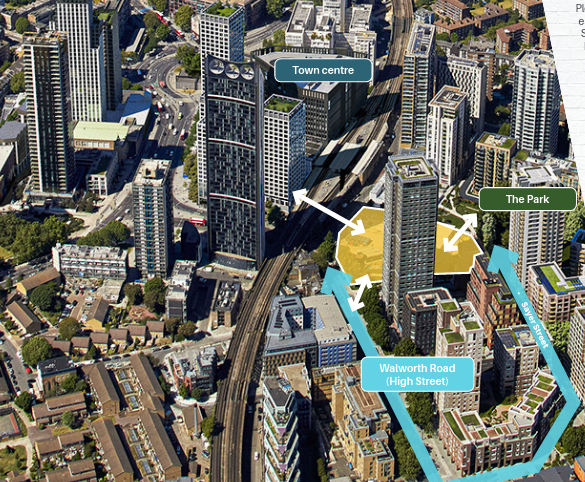 Southwark Council is set to change its planning rules to enable developer Lendlease to build an office block on the site of the former Heygate estate. The block would be on the final development plot of Elephant Park, Plot H1, which is earmarked for housing under Lendlease’s current planning consent. Lendlease has now applied to replace this consent with an entirely new one, to build an office block, not housing. Southwark is also ready to change the New Southwark Plan (NSP) to pave Lendlease’s way to a successful approval of the application. The change will allow an increase in the office floorspace on Elephant Park, from the maximum of 5,000 sqm that Lendlease is presently allowed, to the 49,565 sqm it is proposing in its new planning application. Southwark has said ‘an office development on this plot is broadly supported’ in the ‘Conclusion’ of pre-application discussions with Lendlease.

The change to the NSP, which governs all development throughout the borough, is part of a ‘main modification’ to the Plan. The modification MM7 would allow 60,000 sqm of ‘employment floorspace’ to be built specifically on Elephant Park; at the moment the local plan envisages a maximum of 30,000 sqm of ‘business floorspace’ for the whole Elephant and Castle Opportunity Area.

The NSP, including the main modifications, is in the final stages of approval by government inspectors. Comments on all proposed modifications can be made up to a deadline of 24 September 2021.

From open space to office space

A good part of Plot H1 sits on land that was covenanted for use as open space, in perpetuity, when ownership was devolved to Southwark in 1985, on the abolition of the Greater London Council (GLC). In 2014 Southwark transferred ownership of the Heygate land, including Plot H1, to Lendlease, removing the covenant in the process.

In 2019 Lendlease took advantage of a poorly drafted s106 legal agreement with Southwark to increase the maximum number of homes allowed on Elephant Park by 220 units, to 2,689. Lendlease is using ten plots of land for these homes, instead of the eleven available, leaving itself a spare plot. This is the justification for the new planning application - Lendlease claims that they have fulfilled their housing obligations under the current planning consent, so Plot H1 can be used for an office development, which would create jobs.

Lendlease does not say in their new planning application how many homes could be built on Plot H1, if it were used for housing as originally intended, but by making a rough comparison with neighbouring plot H7, a capacity for about 340 homes can be calculated.

Lendlease’s Plot H1 planning application is the latest of a succession of self-advantageous manoeuvres. As well as increasing the number of homes on the estate and squeezing them into fewer plots, Lendlease has also announced that over 900 of the free-market homes would no longer be for sale, but kept under their ownership, and let to private renters, not sold. Before this, they marketed and sold substantial numbers of homes overseas . This all followed the notorious 2010 Heygate regeneration agreement, which reduced the affordable housing to 25%, from 35%, with a meagre 79 social rented units (later inching up to 100 units).

Southwark Council is now poised to give up a prime housing site (in the middle of an opportunity area, on former council estate land) at Lendlease’s behest. Southwark is doing this while embroiled in controversies across the borough about infill development on council estate sites, none of which are anywhere near the size of the plot it is about to give up.

Lendlease’s argument that offices will good for employment is entirely self-serving. They did not make this proposal for Plot H1 in 2012, when applying for their first planning permission. Instead, they have tricked their way into a position where they have built more homes than originally consented, on a smaller space, and now want to squeeze in an extra office block for good measure.

Southwark Council have aided Lendlease’s application by proposing a ten-fold increase in ‘employment space’ on Elephant Park, in the New Southwark Plan - a huge uplift, introduced to boost the chances of an office-space application being approved.

There has been much speculation about whether Southwark’s recent change of leadership has resulted in a change of direction for the Council.

This is the planning committee’s chance to prove that the Council won’t roll over to Lendlease indefinitely. The committee must stop this cynical attempt to manipulate planning policy to Lendlease’s advantage and reject this planning application.

Once this is done, Southwark should start a sensible discussion on what is to be done with this prime site, with the focus on the local community’s real needs, including affordable housing, with all the amenities and open surroundings needed to make life liveable in London.

470 comments and objections have been made to this application.

If you would like to add your objection, you can do so here.

You can use this model objection text or view our full letter of objection here.