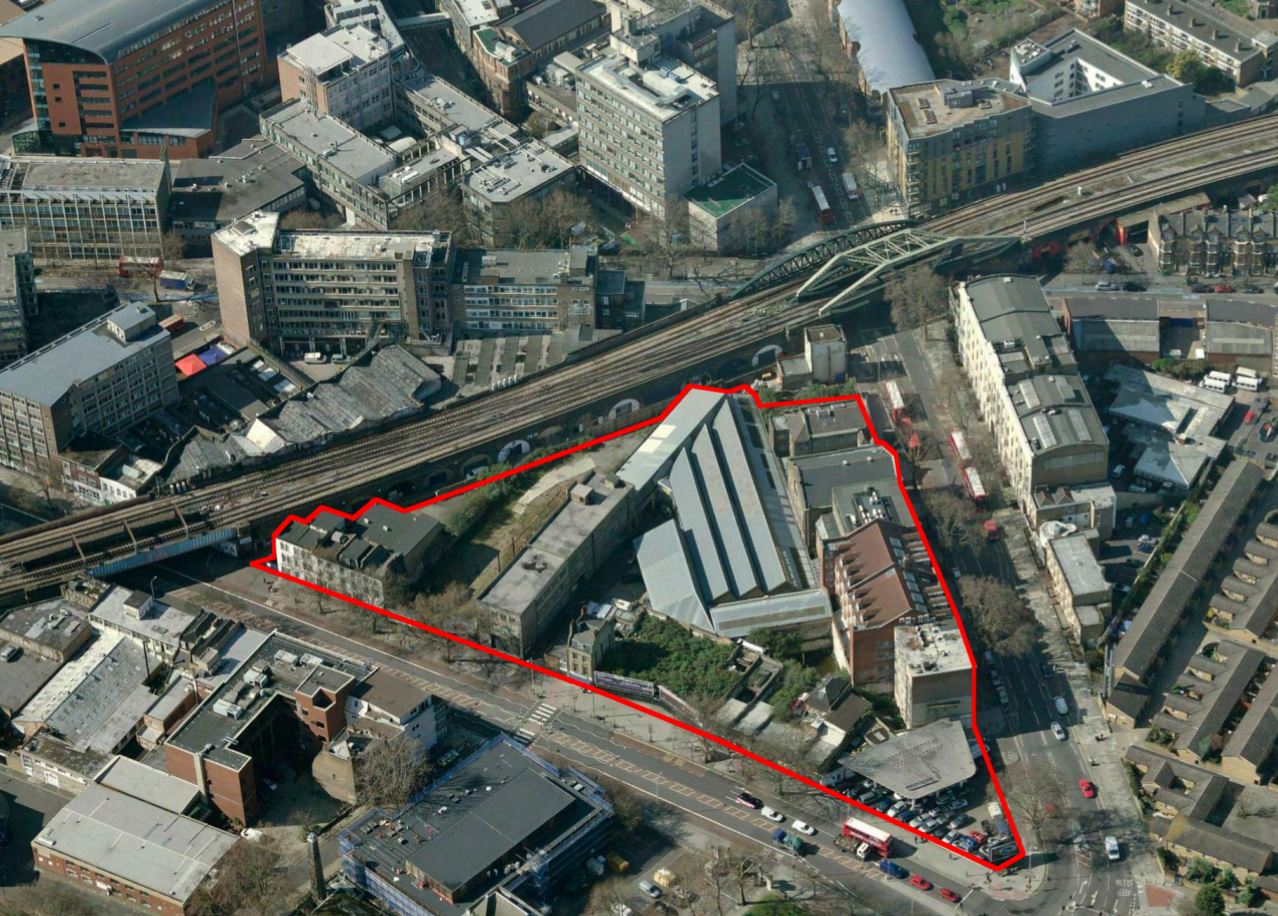 Peabody Housing Association has finally submitted a Planning application for its long-awaited Borough Triangle development at Elephant & Castle. This large triangle of land sits between Southbank University, Borough road and the Crown Court on Newington Causeway.

The site is currently home to the IPSOS MORI buildings and Baptist church on Borough road, which will be the only buildings to survive the redevelopment. The Georgian-built Institute of Optometry and London School of Musical Theatre (formerly the Institute for the Blind) will both be demolished under Peabody’s plans. The latter being replaced by new premises for the Ministry of Sound, which Peabody will build in its place. 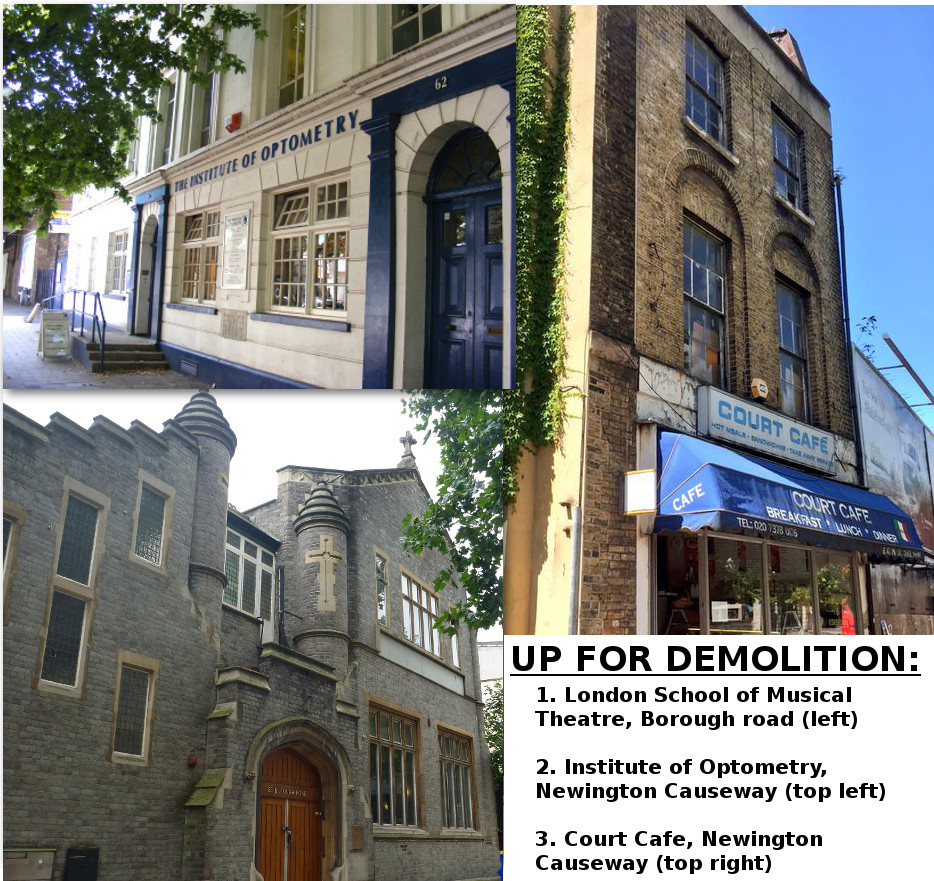 The shops and warehouse spaces on the Newington side of the site will also be demolished. These are currently being used as a Pop-up arts and cultural space by ‘Hotel Elephant’ and ‘The Paperworks’.

Besides new premises for the Ministry of Sound night club totalling ca. 6,000 sqm (allowing an extra capacity of 400 people over its current venue), Peabody plans to build some retail space; 10,000 sqm of office space in a shiny new corporate HQ for its staff; and a total of 529 new homes in a number of (predominantly glass) buildings of up to 38 storeys.

We originally had high hopes that this site would provide the desperately needed social rented housing that local people need. Unfortunately Peabody appears to have followed the trend of going for the more profitable ‘affordable rented’ housing with rents of up to 80% market rent. It has also followed the trend of fudging and misleading about the precise nature of the affordable housing it is providing. In its Housing Statement Peabody states that it will be providing 96 intermediate units (16.7% of total) and 78 units at affordable rent (16.5% of total). 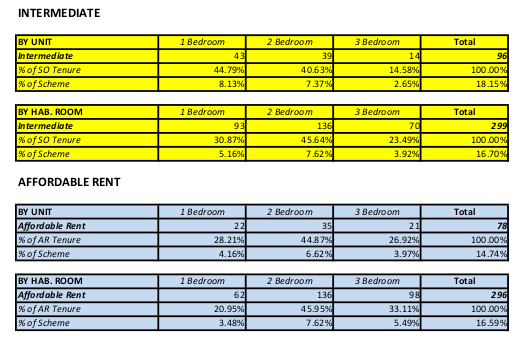 However, Peabody’s Planning Statement starts off by explaining the council’s affordable housing policy: “5.117 In terms of affordable housing tenure, the Core Strategy at Strategic Policy 6 identifies that for development within the Elephant and Castle Opportunity Area the affordable housing should be delivered at 50% intermediate and 50% social rented.” but then dropping the word ‘social’ from social rented, astonishingly goes on to claim that the application is policy compliant: “The proposal provides 16.7% intermediate and 16.5% for rented which is considered to comply with policy.” 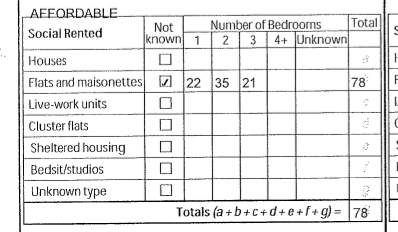 We also checked the Design & Access Statement which states not only that the units will be affordable rent, but that they will be segregated from the other tenures (the high-rise towers will be exclusively private and intermediate housing).

Finally, we wrote to the Council’s planning department asking for some clarity on whether the 78 units were for social rent or affordable rent; this is the baffling response we received. 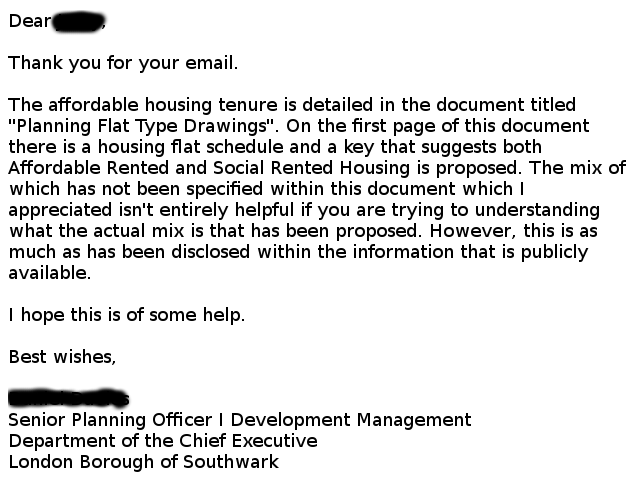 Southwark recently published a detailed study of the impact of the introduction of affordable rent in the borough. From its underlying data we can see that a 1-bed social rented flat in SE1 would cost an average £97 per week, but a 1-bed flat at the new ‘affordable rent’ of 80% market rent would cost £316 per week. Given that the median household income for council tenants in Borough and Bankside is £9,100 per year, it is clear that Peabody’s affordable housing offer will be of no help to local people in housing need.

Borough Triangle is the second largest development in the Elephant & Castle opportunity area after the Heygate. No doubt lengthy discussions have taken place between Peabody, the Ministry of Sound and Southwark about what should be delivered on this key regeneration site. It is very dissapointing that a Housing Association with Peabody’s reputation is not only failing to provide social housing, but is also seeking to mislead people about the fact. It is doubly dissapointing - but not surprising on past record - that Southwark is going along with it.

It seems Peabody has come a long way from the philanthropic intentions it was founded on in 1862, by George Peabody who wanted to __ “ameliorate the condition of the poor and needy in this great metropolis” __.

You can object to Peabody’s application (ref:14/AP/3130) by sending an email to planning.applications@southwark.gov.uk

Peabody’s application includes the mandatory Statement of Community Involvement (SCI), which is required to show evidence that it has consulted on its plans with the local community. Peabody instructed a public affairs company called Bellenden to advise on its application, conduct the consultation exercise and prepare its SCI.

Bellenden was founded and is run by former Chair of Southwark Labour and local councillor Mark Glover. It was named after the road in which he lives, Bellenden road in Peckham. Glover stepped down as councillor in May 2014. Amongst other things, Bellenden offers its clients a ‘political intelligence’ service, which it says involves __ “learning how political parties and their individual members are thinking on any given issue” __ and then __ “seeks to enlarge and inform their thoughts on behalf of our clients.” __

With his 12 years as a senior Southwark councillor, we don’t doubt that Mr Glover is very well placed to provide this service.

« Council Housing - going up or coming down?
Stand up for more social housing (at 80% market rent) »
comments powered by Disqus