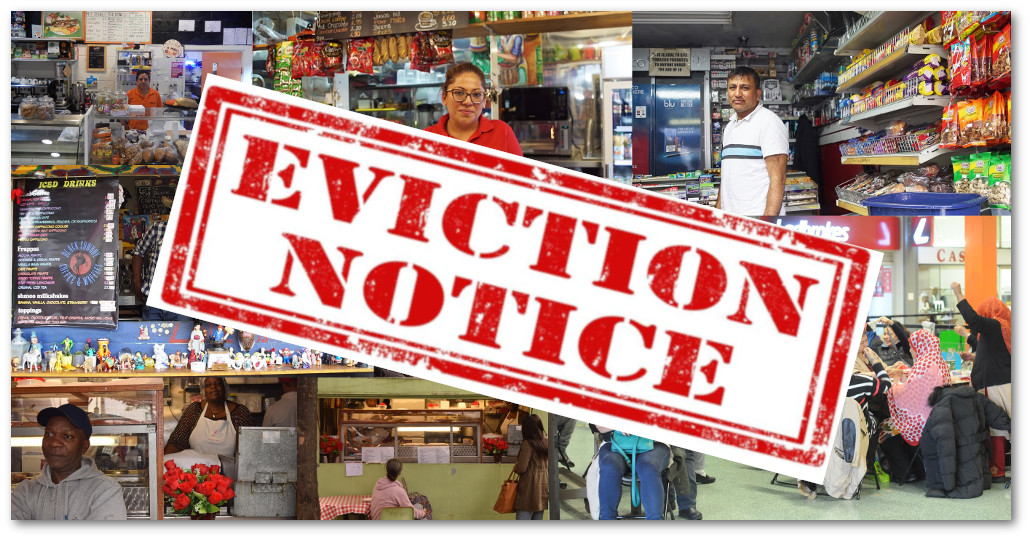 Southwark Council is set to assume Compulsory Purchase Order (CPO) powers, on behalf of offshore developer Delancey, at its Cabinet meeting this Tues 7 April (postponed from 24 March). While this extraordinary move will strengthen Delancey’s hand in ongoing negotiations with various development stakeholders, such as TfL, and will relieve Delancey of funding risks, the scheme itself remains unchanged, delivering only 116 social rented units and displacing traders wholesale. The Cabinet meeting is also set to approve a report that will override local residents’ legal rights, for the loss of light caused by the redevelopment. A third report will approve the recently announced £200,000 relocation assistance for traders.

The meeting will be by videoconference, but no livestream is advertised.

As we reported in our last blogpost Southwark intends to lease both the shopping centre and London College of Communications buildings themselves. Subleasing arrangements will return the shopping centre and LCC back to the control of Delancey and University of the Arts London, but as nominal public property, residents legal ‘right-to-light’ options can be overridden. Residents will no longer be able to seek an injunction against the development (while remaining able to claim compensation). Southwark say that there will be no cost to the Council from their leasing arrangements, other than officer time, but the report supplies no figures.

No guarantee that scheme will be built anyway

Southwark’s extraordinary measures illustrate its determined support for Delancey’s redevelopment of the shopping centre, despite the shortfall in social rented housing provided and the mass displacement of traders. Local charity and advocate for all traders Latin Elephant estimates that over half still have nowhere to go.

Southwark’s unwavering support extends as far as neglecting to obtain a guarantee from Delancey that the scheme will go ahead, even with the CPO powers being exercised on their behalf, saying ‘it is not necessary to impose… an obligation to build the Scheme as the measures negotiated for inclusion in the indemnity agreement give the Council comfort that EC is likely to proceed with the Scheme.’ 1

The proposed measures follow a survey conducted by the SE1 news website that shows 72% of local people want the centre kept open, in the light of the Coronavirus public health crisis. In response Delancey reiterated that they still intend to close the shopping centre on 31 July, while waiving rent and service charges (a long-standing traders’ demand) and promising to making pharmacy and food supplies available, beyond then, if the public health crisis continues. The Up the Elephant Campaign, supported by the 35% Campaign, has consistently opposed Delancey’s shopping centre redevelopment scheme, since its inception, over 3 years ago. We support the ongoing legal challenge to quash Delancey’s planning permission.

Over time various concessions, dragged out of Delancey by campaigners, have made marginal improvements to the redevelopment. Southwark’s pledge of £200,000 for the traders is also welcome; it now urgently needs to be distributed as cash grants to traders. Nonetheless, Delancey’s scheme still remains a bad one. Delancey are displacing an entire community of traders, and destroying a social hub for the many working people from all over the world who have made the Elephant their home. The new development will have a miserly 116 social rented homes, out of nearly a thousand new units (if they ever get delivered).

So, Southwark Council should not be bending over backwards helping Delancey, in any circumstances - certainly not now, when half the traders still have nowhere to go, while Southwark has an obligation to help secure traders accommodation in the new development it never properly exercised. We do not need to add that the traders’ desperate situation has been rendered dire by the Coronavirus crisis.

The UP THE ELEPHANT CAMPAIGN HAS THEREFORE MADE THE FOLLOWING DEMANDS TO SOUTHWARK COUNCIL; You can support us in our fight for fairness for traders, by sharing these hashtags; #supporttradersnotdelancey #supportelephantnotdelancey #ElephantJR.