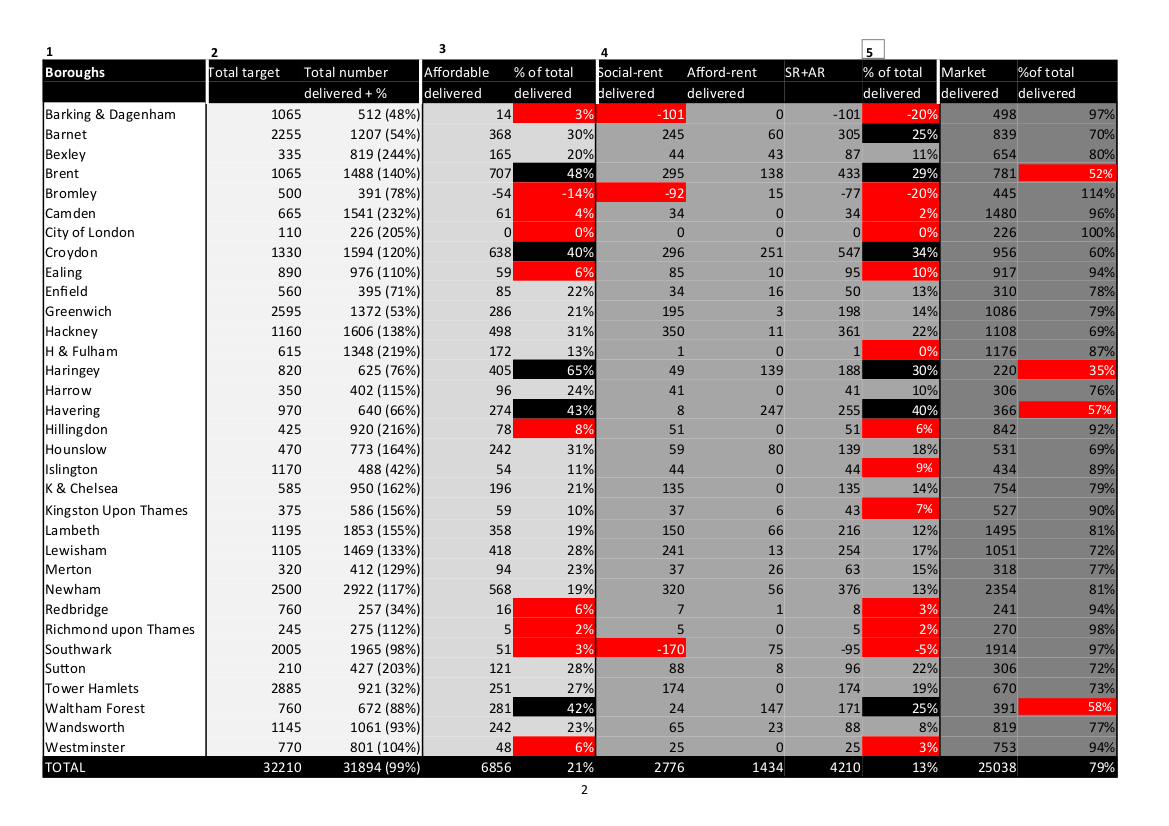 These shocking figures are revealed in an analysis by the London Tenants Federation of the latest GLA housing delivery data published in March. Only Barking & Dagenham and Bromley performed worse, at least when it comes to social rented housing. In terms of numbers, 170 fewer social rented homes were built in Southwark than were sold or demolished during the period and this is despite the fact that over the last two years Southwark has built 152 homes as part of its pledge to deliver 11,000 new council homes (over 30 years)2.

By contrast, the figures also show that 1,914 private homes were built in the borough, which is 97% of the total delivered and gives a clue as to what’s going wrong. Developers are getting to build as much private housing as they want, while ruthlessly driving down the amount of affordable housing particularly social rented housing, required from them in return for planning permission.

These jaw-dropping figures also paint an entirely different picture to what is happening in the borough from the one Southwark is painting. A quote from Southwark Council leader Peter John can serve as an example:

“London is suffering from a chronic shortage of quality, affordable homes. We in Southwark are committed to using every tool at our disposal to increase the supply of all kinds of homes across the borough.” (Council leader Peter John)

Despite Peter John’s assertion, there is one tool that Southwark is not using to increase the supply of affordable housing and that is the power to refuse applications which don’t have the required 35% affordable housing. Developers are obviously getting away with murder, the latest example of which is Skipton House where L&R’s planning application has a pitiful 15% affordable housing ‘offer’ - none of this to be on-site. This ‘offer’ is justified by yet another secret financial viability assessment, which Southwark, despite their new transparency policy are refusing to release.

If we are ever to bridge this gap between fantasy and reality in the delivery of affordable housing, Southwark needs to grow a backbone. In the meantime you can lodge an objection to Skipton House by clicking here.

In their anxiety to demolish the Aylesbury estate, Southwark and its development partner Notting Hill Housing have been getting ahead of themselves and started demolishing buildings on land they don’t yet own.

Aylesbury residents awoke on wednesday morning to the sound of diggers demolishing parts of the estate. Agnes Kabuto who lives with her 78 year-old mother in one of the last occupied maisonettes on the Chartridge block said “We were woken by a large banging noise, the whole building was shaking - we couldn’t believe they’d actually started demolition before the CPO has been granted.” She and a number of other Leaseholders in phase 1b/1c, are still awaiting the government’s decision following the public inquiry into Southwark’s application to compulsory purchase their homes. This was due on 3rd May, but has now been delayed. This did not stop Notting Hill Housing from “inadvertently” starting demolition on the CPO land.

Quick action by the leaseholders brought an apology from Southwark after the intervention of the Secretary of State for Communities and Local Government. However, Southwark and Notting Hill Housing are determined to proceed and say they will be writing to the leaseholders shortly with details of ‘the nature of future work to be undertaken’. The CPO decision is due to be issued some time in the coming weeks.