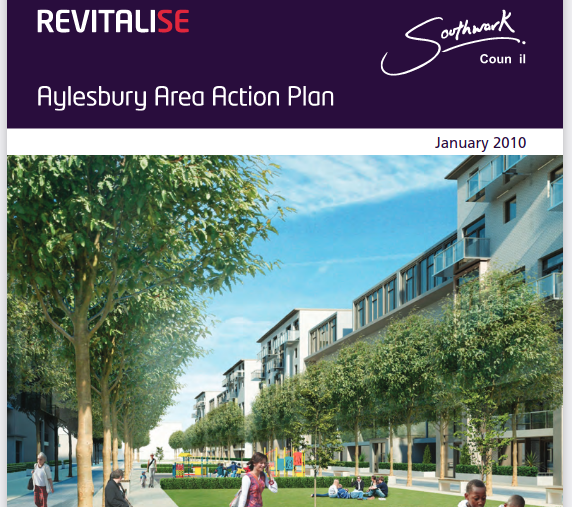 Without consultation, Southwark Council has decided to scrap the 182-page planning document which sets the parameters for its redevelopment of the Aylesbury estate. The so-called Aylesbury Area Action Plan (AAAP) will instead be replaced by a 2-page ‘Area Vision and 5-page ‘site allocation’, as part of the New Southwark Plan.

The decision was revealed in a late background paper for the Examination in Public of the New Southwark Plan (NSP). Described by the government Inspector at the Examination in Public (EIP) as a ‘raft of policies’, the AAAP incorporated 29 policy documents, covering all aspects of the redevelopment, including housing, design, open space and the phasing of the development. It was adopted as the effective rule-book for the redevelopment of the estate in 2010, after four years of extensive public consultation, including its own separate public examination.

The implications of this are significant; while Southwark claim that all the relevant policies in the AAAP will be taken into account by the NSP, so that such things as more generous space standards, more family housing and car-parking for residents are retained, the lack of any prior notice or consultation has raised strong fears that much that was beneficial in the AAAP will not be carried across into the New Southwark Plan.

Amongst the policies supporting the AAAP, policy at 3.6.1 requires the scheme to result in ‘zero carbon growth’:

“The development will be designed to result in zero carbon growth, that is, no net growth in carbon dioxide emissions despite an increase in the number of dwellings. This will require buildings which are highly energy efficient.”

While the NSP requires developers to take measures towards achieving carbon neutrality, and has targets for major developments (Policy P69), the very specific requirement that the Aylesbury achieves zero carbon growth will be lost.

Experience has shown that unless such a requirement is exact and explicit, as it is for the Aylesbury, it can be lost when complicated, large schemes are considered for planning approval and the decision is made by balancing out how well the development meets all planning requirements, not just the environmental ones.

Policy at 4.5.1 of the AAAP requires that the Aylesbury redevelopment results in no net loss of open space. Again, while the NSP has the strategic target for the borough, to retain and protect all open space, it makes no specific reference to open space requirements for the redeveloped Aylesbury.

This is a particular concern, given Southwark’s welcome new commitment to re-provide all the social housing on the new development, which could put space at a premium. The NSP also allows payments in lieu of providing open space, a get-out that is often used by developers who want to build to maximum density. Paragraph 4.5.2 of the AAAP says: “We will require children’s play areas to be integrated into the residential areas. About 3 hectares of children’s play space and youth space will be provided”.

The proposed New Southwark Plan makes no requirement to replace any of the children’s play and youth space.

Campaigners and residents giving evidence at the EIP also pointed out that there were three separate policies for play space and open space in the AAAP (PL5, PL6, PL7), and that they provided space well beyond that which was standard. This generous allocation of space in the AAAP reflects the estate’s design, around an extensive network of children’s and youth play spaces. Campaigners noted that this was part of the family orientation of the AAAP, and that these policies would need equal prominence in the NSP, to make sure that families remained a priority in the redevelopment.

In March 2019, Southwark announced in a Cabinet report an ‘important shift’ in its plans for the Aylesbury, with the ‘ambition… to see the replacement of the number of social rented homes on the footprint of the estate’. The density and number of homes on Phase 2 was therefore increased, with 400 extra units, up to about 1,250 homes in total.

The New Southwark Plan follows through on this, now saying that “it would now be appropriate to consider an increased number of homes within the land covered by the Action Area Core, replacing all the existing social homes within the footprint of the estate”.

But only 148 social rented units have been delivered so far, with a further 581 council houses under construction on the First Development Site. These leaves about 1,500 social rented units to be built, which is about half of the total remaining development, if Southwark is to replace the Aylesbury’s social rented housing (see Table 14 here).

Meantime, Notting Hill Genesis remain in possession of a planning permission that allows for a loss of social rented units, which points to either further increases in density or a deal with Notting Hill Genesis, as was done for the First Development Site, or some combination of the two.

The NSP described the Aylesbury estate as “characterised by large concrete slab buildings built in the mid-1960s –70s, now at the end of their service life.”

This drew criticism from residents, leading to a change of wording. Further objections during the EIP hearing, argued that the Council had submitted no evidence supporting the claim that the estate was at the end of its service life and had failed to investigate whether refurbishment could be a more viable and sustainable option. This was contrasted to Southwark’s decision to bail out Notting Hill Genesis housing, at a cost of over £200m, after the housing association failed to deliver the First Development site, evidently hit with financial viability problems.

Successful examples of the refurbishment of estates built using the same system as the Aylesbury and which might usefully be examined, can be found on the Six Acres estate in Islington and the Doddington estate in Battersea.

These figures also take no account of the homes lost through demolition. When this is factored in, the situation is even worse. Southwark will have to build 2,750 homes just to get back to where we were, before demolition began. Southwark claim that this will be done by 2027/28 (see para 31 here), but they then must build 1,500 more homes to reach 4,200 homes and this will not be achieved until 2035 (Appendix 2: Sites Methodology Report pg 60 April 2021).

Campaigners cast some doubt on whether this large net gain in housing will ever be achieved, without which the huge displacement and disruption of the whole regeneration can barely be justified. The additional pressure on the housing waiting list of rehousing displaced tenants was also noted.

The time has come for a rethink….

The Aylesbury Area Action Plan (AAAP) was adopted 10 years ago and was supposed to govern the 25-year redevelopment of the estate. Action Plans are special planning policy documents for big, extensive redevelopments. They require a high level of consultation and the involvement of affected residents.

The Aylesbury AAP is a complex document, with a large evidence base and was only finalised after its own Examination in Public. There may now be good reasons to update it, not least because it comes into conflict with more recent planning policy documents.

But it cannot be right that it is simply discarded, at short notice, half way through the estate’s redevelopment, without first carrying out a proper public consultation. Southwark’s reassurances, given in the EIP, that all the key policies will be carried over to the New Southwark Plan are not good enough, particularly given the sorry history of the estate’s regeneration so far

Any proper consultation must also take into account the slow progress of the redevelopment to date and the urgent need to address the climate emergency. It should also assess the impact of the redevelopment on the residents, the majority of whom are from black and ethnic minority backgrounds, and what benefits, or otherwise, will fall to them - a point forcefully made by long-term residents, past and present, in the EIP.