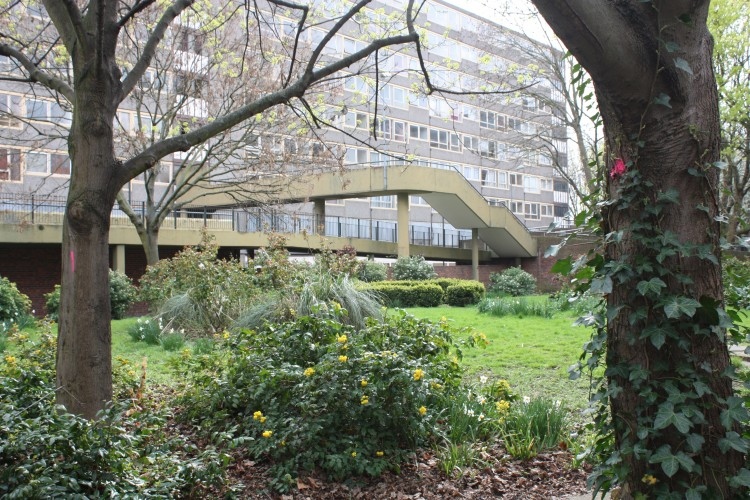 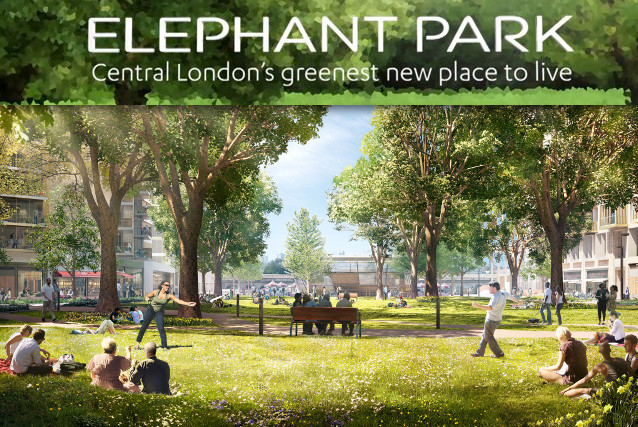 Developer Lendlease has rebranded its 25 acre Heygate redevelopment ‘Elephant Park’ and made much of the new ‘public’ park it will be building. But many still remember that the site used to be home to a sizeable public park called Elephant Park, which enjoyed public open space designation in the council’s planning policy1 and Metropolitan Open Space protection by form of covenant.

In 2006 the council removed this open space designation on the basis that “The space principally addresses the needs of Heygate residents and following the demolition of the estate there will no longer be a need for this type of estate-based facility”2. The park was eventually closed in 2011 amidst fierce opposition from residents. It was subsequently divided in two, with one half leased to the neighbouring Delancey ‘Tribeca Square’ development to be used as a compound and the other half to Lendlease for use as a box park & sales showroom.

According to a 2002 audit by planning consultant Michael Parkes, the Heygate estate comprised a total 24,195 square metres of public amenity open space:

Lendlease & Southwark claim that the new park will be central London’s largest park in more than 70 years’. However, according to the detail in Lendlease’s plans, the new park will not be designated open space and will be just 8,220 square metres in size - representing a net loss of more than two thirds of the Heygate’s former open space.

When probed during the Feb 2013 CPO public inquiry into the scheme, architect Ken Shuttleworth said the ‘largest park in 70 years’ claim is based in relation to the nearby Geraldine Harmsworth Park (Imperial War Museum), which received designation in 1934. But we did a little research and found that the claim to being central London’s largest new park in 70 years is pure fiction and plainly ridiculous. In fact, it’s not even the largest new park in Southwark in 70 years - let alone central London: the following Southwark parks are all larger than the one proposed by Lendlease (0.82H) and have all received open space designation since the Geraldine Harmsworth park was opened in 1934:

The planning application documents also show that the Heygate’s new park will be just 42m wide (around the same width as New Kent rd), overshadowed by 12-30 storey buildings and hemmed in by a new road servicing the development’s 700 new car-parking spaces3.

The original plans proposed a sizeable public park and public open space on the site of the Heygate as can be seen from the original masterplan illustrations:

Furthermore, the remaining green spaces on the development will consist of ‘raised courtyards’ enclosed between clusters of blocks, which will have zero public access:

But what is even more disconcerting is that the planning application’s ‘Estate Management Strategy’ statement states that the new park - and indeed the entire footprint of the development - is going to be privately owned and privately managed by an Estate Management Company (EMC) set up by Lendlease.

The EMC will employ a ‘Town centre security team’ “for the delivery of effective anti‐social behaviour services across the Estate”. (para 8.2) 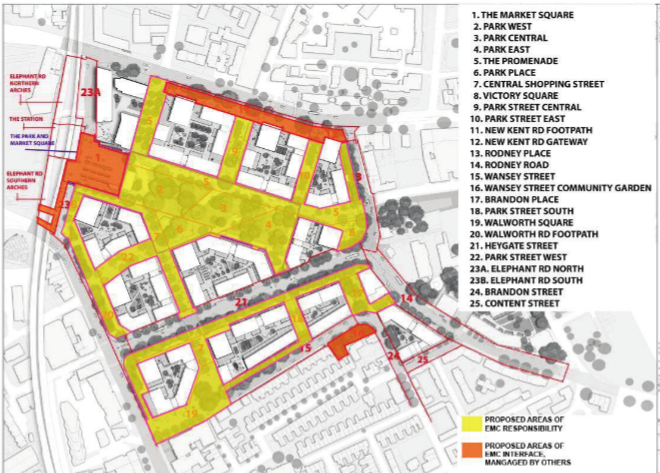 In June 2016, Lendlease submitted its Park Area Strategy to the Council for approval. The Strategy showed that the new ‘public’ park will be fenced it behind iron railings, secured by a facilities management company and locked between dusk and dawn.

We have been campaigning in vain to have what little open space there is in the new development formally adopted by the council. Unfortunately it looks like the new ‘Elephant Park’ is going to be yet another addition to London’s growing list of POPAS (Privately Owned Publicly Accessible Spaces).

The Elephant & Castle is officially the most dangerous traffic interchange in London for cyclists. In spite of this, the final masterplan application has dropped all plans to reduce traffic flows at the Elephant and actually proposes to expand the interchange to provide six lanes of traffic. 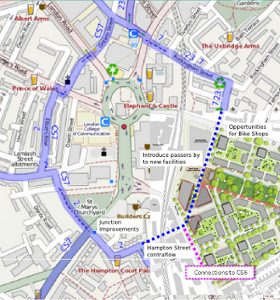 Lendlease has also blocked TFL’s plans for a much needed eastern cycle bypass as part of the proposed Cycle Superhighway 6 (Penge to the City): “A route for the new cycle superhighway (CS6) is not intended to be provided through the proposed Development. The Proposed development is designed to support leisure cyclists rather than being used as a cycling commuter route through the development which may discourage less confident cyclists and conflict with pedestrian movement.” (Transport Statement - paragraph 6.8.2)

The London Cycling Campaign has posted a detailed critique of the E&C interchange plans on its website here.

Furthermore, despite the fact that Elephant & Castle has the highest possible rating in terms of public transport accessibility, the Council’s regeneration partner Lendlease is building over 700 parking spaces3 at the Elephant, in what was intended to be an entirely car-free scheme4.

According to the planning officer’s report, Lendlease has submitted viability assessments demonstrating that “the proposed level of parking is justified on viability grounds”(para. 120). 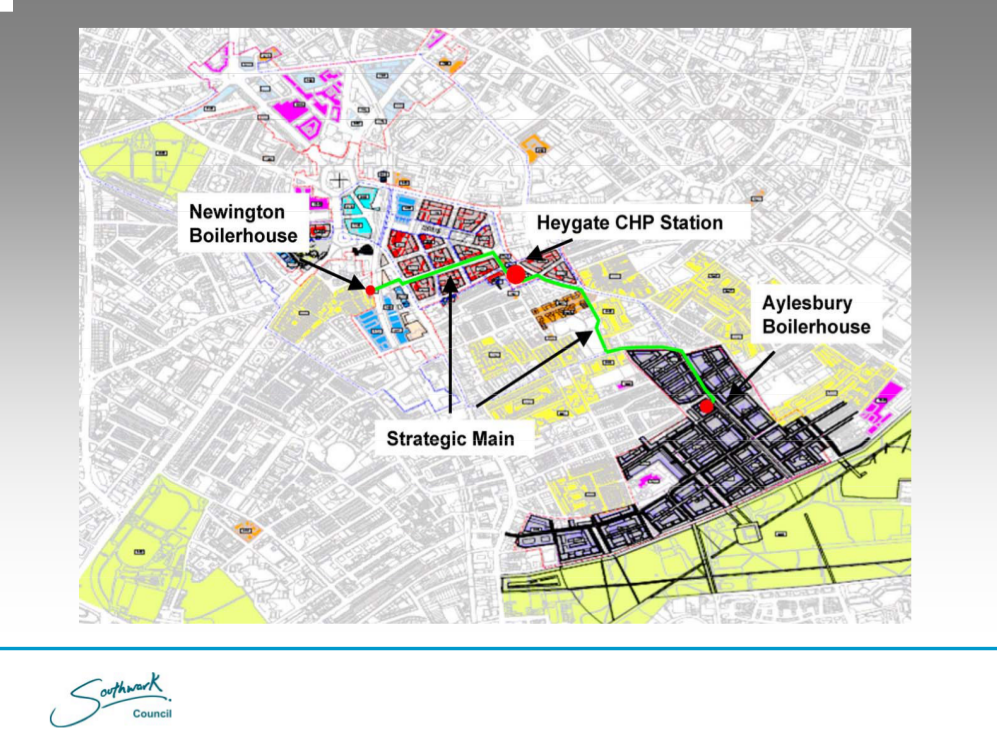 The MUSCo was also going to supply the new Aylesbury estate development and the existing Salisbury and Newington housing estates, making it the largest biomass-fuelled district heating network in London. The plans were so cutting edge that they were lauded by Bill Clinton and hailed as an example of ‘climate positive development’. However, the plans were eventually dropped by development partner Lendlease because the estimated costs were too high. The scheme had become a ‘fairy tale fantasy’ according to the Council’s own cabinet member for regeneration. 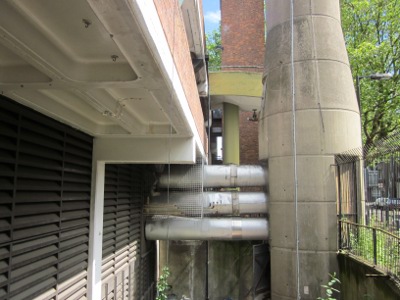 Instead of the MUSCo, Lendlease is now building an ‘Energy Centre’ on the Heygate site, which is essentially a gas-fired boiler. This will replace the previous gas-fired boiler on the Heygate, which supplied heat and hot water through a district heating network (DHN) to over 2,000 homes on both the Heygate and the neighbouring Salisbury estate. The Lendlease district heating network will be smaller and not extend beyond the Heygate footprint - it will not supply the Salisbury estate, and will not be supplying telecoms, potable water, non-potable water, drainage, gas, fibre-optics and vacuum waste as the original MUSCo had planned to. Proposals to supply other estates and developments have been dropped, and all methods of supplying heat and water that rely on renewable sources of energy have been rejected on grounds of their cost impact on viability.

Lendlease acknowledged in its planning application’s Energy Statement that its proposals failed to comply even with the council’s 20% on-site minimum renewable energy requirement: “11.1.7 The Development does not comply with the aspiration for 20% carbon reduction by renewable energy set out in Strategic Policy 13”. As mitigation it promised a few symbolic solar panels totalling around 3% on-site renewable energy (para. 10.5.5) and claimed that it will try to source some of its gas requirements from renewable gas sources. It suggested that one possible future source of renewable gas may be procured from biomethane plants, which would work in much the same way as green electricity. However, the problem is that there is currently only one operational biomethane injection plant in the UK and this has no spare capacity.

In a PR offensive and newspeak worthy of awards, Lendlease is claiming its scheme will be the “first carbon positive urban regeneration scheme in the UK, meaning it produces more energy from its own plants than it uses.”

What it doesn’t explain is that by ‘its own plants’ it means its carbon emitting, fossil-fuel powered gas boilers. Thus the term ‘carbon positive’ is no longer understood to mean producing more renewable (non-carbon) energy than one consumes.