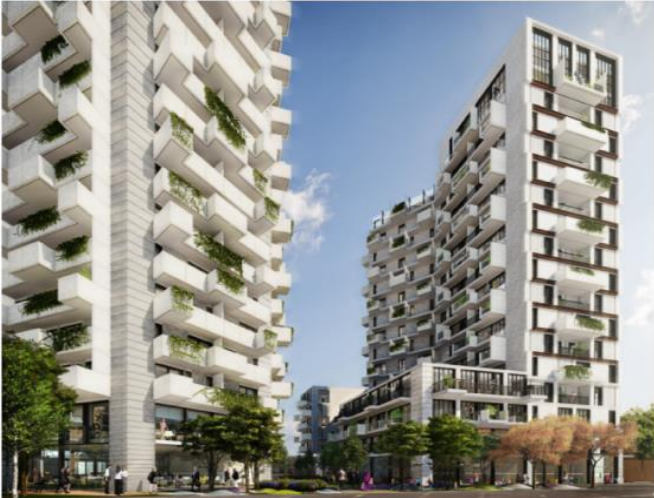 The application for a mixed-use development at 6-12 Verney Rd, just off the Old Kent Rd, behind PC World, is due to be considered by Southwark’s planning committee this Monday (18 June). The proposal is for 3 blocks, the tallest of 17 storeys, comprising 338 residential units, office and workspace and associated open, green and amenity spaces. The application is recommended for approval.

The application follows Malt St, approved less than two weeks ago, Southernwood Retail Park, Cantium Retail Park and Ruby Triangle and is the latest of the big developments being rushed through planning committee, in advance of the adoption of the Old Kent Rd Area Action Plan (AAAP.

Verney Rd shares several characteristics with the other Old Kent Rd developments, although somewhat smaller. All have 35% affordable housing, in an approximate 70:30 social rent:intermediate housing split, compliant with the local plan (Ruby Triangle and Malt St have 40% affordable housing). All, though, are technically non-viable, according to their viability assessments, so should be unable, in theory, to meet this affordable housing requirement.

This contradiction is reducing the consideration of viability into something of a ritual. The developer (in this case CB Acquisition London Ltd, (correspondance address, Cayman Islands)) says that the scheme will only make about half the profit needed to support the affordable housing required and the Council’s appraiser broadly agrees, with some caveats. Then, after ‘stand-back analysis’ or ‘sensitivity testing’ (and with the Bakerloo Line Extension (BLE) very much in mind) the developer graciously agrees to deliver the affordable housing, regardless.

This is different to what has been happening at the Elephant and Castle, where every major development used viability to refuse to deliver policy compliant affordable housing, so it must count as progress - but maybe not as much progress as it first appears.

Verney Rd is designated in the Mayor’s planning policy as a Strategic Industrial Location. Southwark Council and the Mayor have agreed to the release of such land for mixed use development, including housing, before the Old Kent Rd AAP has been adopted, much to the anger of the many Old Kent Rd businesses.

Such developments, where the industrial land is lost, should provide 50% affordable housing, according the Mayor’s draft New London Plan. This was the case for Ruby Triangle and Malt St, as well as Verney Rd. The draft NLP is not yet adopted, so developers are getting in quick, before it takes full force.

On top of this Verney Rd is a very dense development - 1180 habitable rooms per hectare - way above the London Plan range of 200-700 habitable rooms per hectare (hrh) for an Urban Density Zone. But even Verney Rd is not as dense as Ruby Triangle (2713 hrh) and Cantium and Southernwood Retail Parks (2353 hrh and 2522 hrh respectively), rendering the London Plan policy a dead letter, as far as the Old Kent Rd is concerned. Together the developments will deliver over 4,600 homes, with a gross development value above £2bn, with the potential for a big impact on profitability from any marginal improvements in the viability figures.

All the Old Kent Rd developers have shown a marked reluctance to take advantage of the grant funding available from the Mayor - only Ruby Triangle and Malt St have done so and then only for 5% of the affordable housing. As the Southernwood Retail Park developer explains it, grant funding would have ‘a significant negative impact on the viability of the scheme’.

So, the picture that emerges is that of a pact being struck - developers will deliver the affordable housing that the local plan requires, but not much more, regardless of the true profitability of the developments and of any ‘strategic’ target of 50% affordable housing, set by the Mayor. On the other hand, should, say, problems occur with the BLE, reducing the prices that can be charged for new homes, it is not hard to envisage developers returning to Southwark, reminding them that they always said their schemes were technically unviable, and looking for a reduction in the affordable housing.

Indeed, this eventuality is even envisaged in the proposed small print of the planning consent.

Paragraph 256 of the planning committee report.