There was no sound of a cock crowing, but when asked in a recent radio interview if it is correct that there would only be 79 social rented units on the new Heygate, council leader Peter John replied 'no' three times.

However, while Councillor John does go on to say that the 3 bed affordable units for rent will be at council rent levels, he cannot bring himself to say that there will only be 79 of these, as we can see in the document pages below. 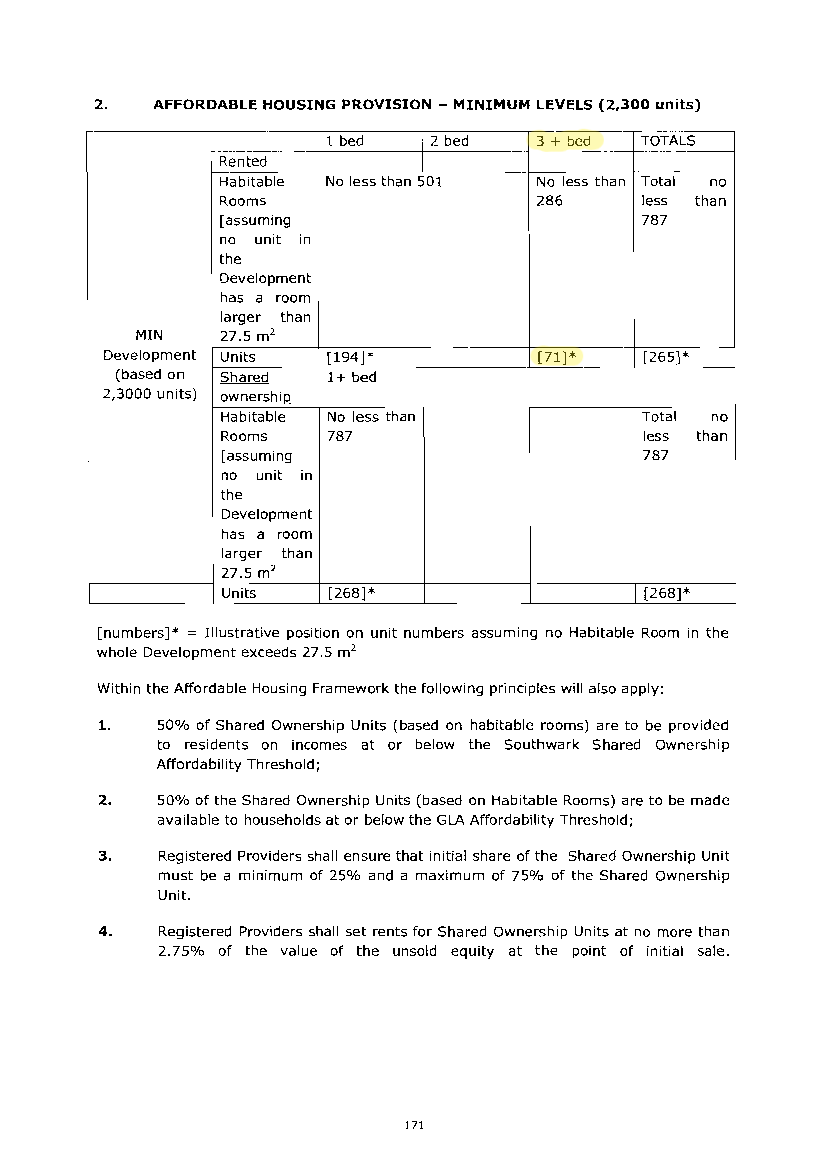 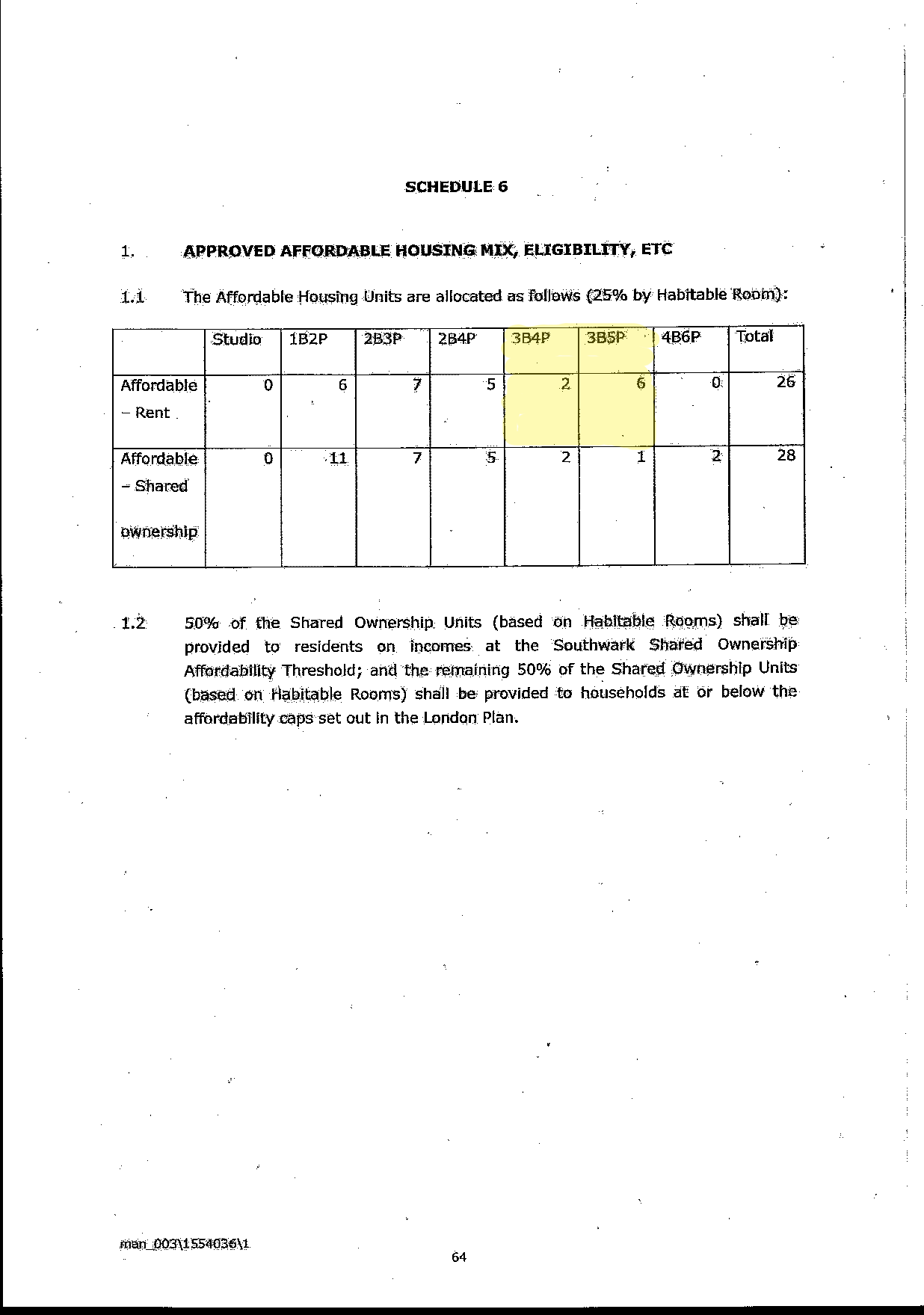 These are Appendix 4 and schedule 6 respectively of the two s106 agreements covering the Heygate site. They are legal agreements that detail how much public benefit the developers will provide, including affordable housing.

Like many such agreements they are not always clear to ordinary people, but look carefully at the highlighted areas and you can see the figures 71, 6 and 2 - making a total of 79 three-bed homes (i.e. council or social rent levels).

Councillor John also says that the 1&2 bed affordable homes for rent will be at 50% market rents (there will be 212 of these). But at 50% of market rent, affordable rent is no substitute for social rent. 'Southwark Council's Response to the London Plan Revised Minor Early Alterations consultation in June 2012' shows this very clearly: in SE17 at 50% market rent the average weekly rent across all unit sizes is £194, while the median weekly income of a council house tenant is £174.

We can also see from the s106 agreements, that there will be a total of 291 affordable homes for rent, either affordable rent or social rent - much fewer than the 700 Cllr John says will be available during the interview. The difference is made up by 296 part buy-part rent units, which Cllr John doesn't mention at all.

The Heygate estate had 1200 social rented units, there will now be 79. Southwark has 20,000 households on its housing waiting list. They should be Southwark's priority but none will be housed in the new Heygate.

In the same interview, Cllr John also paints a rosy picture of the rehousing of former Heygate residents. He says that the vast majority have moved into brand new homes and are delighted. In fact the vast majority have simply been moved into existing council house stock elsewhere in the borough, and only 45 have moved to brand new homes. This was conceded by Southwark Council at the recent public inquiry determininig a Compulsory Purchase Order on the remaining leaseholders on the Heygate estate.

"5.16 ...the Acquiring Authority agreed that tenants leaving from this point onwards were entitled to a right to return to new build affordable housing property built through the early sites programme or secured through a development within the core area (via a s106 agreement) for a period of up to seven years. Subsequently 250 tenants entered into such an agreement with the Acquiring Authority. To date 45 former Heygate Estate tenants have chosen to return to a new home made available through this process." (Statement of Evidence, CPO Public Inquiry 5th Feb 2013)

Cllr John also mentions the 'right to return' in his interview. This supposedly enables former Heygate residents to return to the new properties on the Heygate estate.

This was only offered to the secure tenants on the estate (only around 600 by the time of the decant in 2007). It expires on 30 Sep 2015. Only 8 social rented units and only 54 affordable units of any kind will be built by then. Above all, there will only be 79 social rented units in the whole development - whenever it is finished.

Leaseholders won't fare any better: the levels of compensation offered for their homes does not allow them to buy in the area, let alone at the prices quoted for Trafalgar Place - the first phase of the new Heygate - which start at £310,000 for a one bedroom flat.

All in all, it doesn't matter what kind of resident you were, the chances of you getting back on the Heygate are very very small.

"There should have been new homes built for residents before they moved. That didn't happen. But they've got the right to return. In reality, though, few will come back to the social housing on the new site." (Councillor Fiona Colley, Cabinet Member for Regeneration)

Finally, according to Cllr John the Heygate was also a 'by-word for social failure, crime and antisocial behaviour'. Former residents beg to differ and have set up a website in an attempt to set the record straight: www.heygatewashome.com 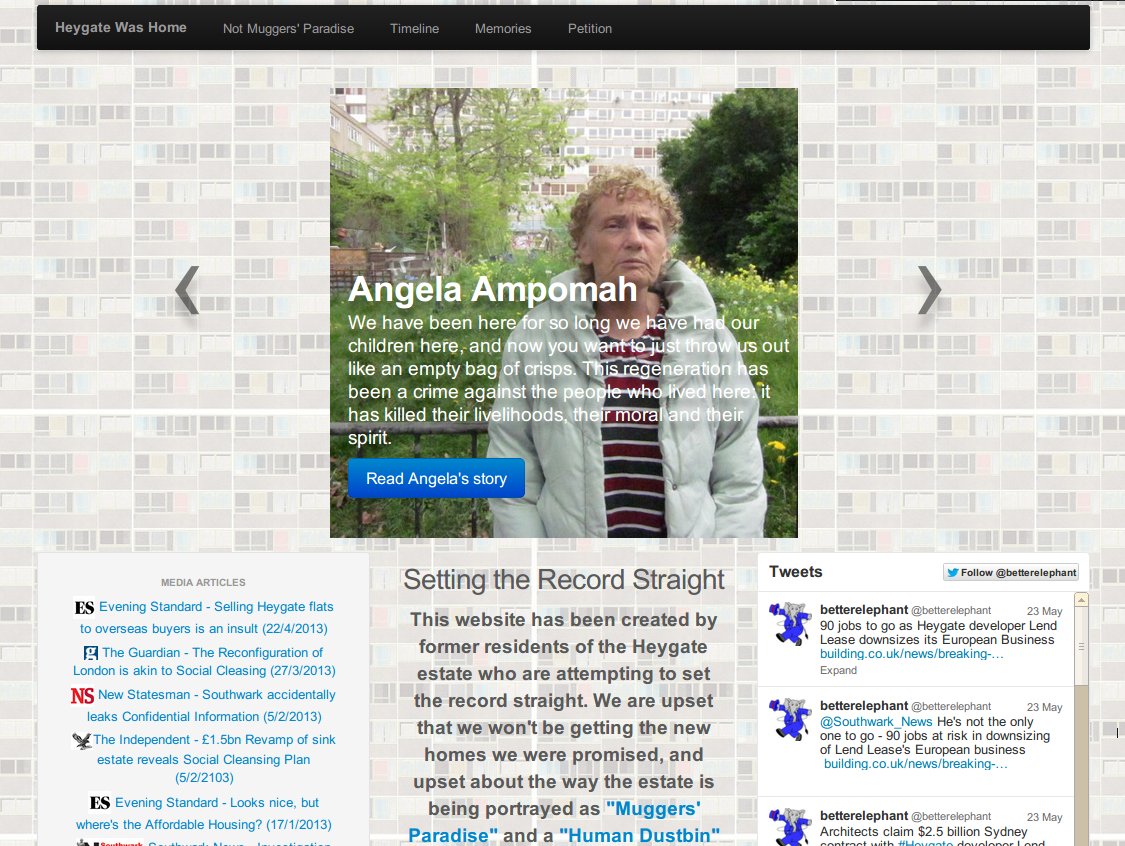