Southwark Council has been ordered to disclose the financial viability assessment provided by developer Lend Lease to secure the approval of its Heygate masterplan application. This assessment justified the reduction in the affordable housing requirement from 35% to 25% and the reduction of social rented housing to just 71 units.

A Freedom of Information request for the viability assessment was rejected by Southwark Council, but the council's decision has now been overturned by the Information Commissioner who has given Southwark 35 days to produce the assessment.

The Commissioner's report is a closely argued and detailed 35-page document. It draws upon previous decisions made both by the Commissioner and the Information Tribunal to come to its conclusions. 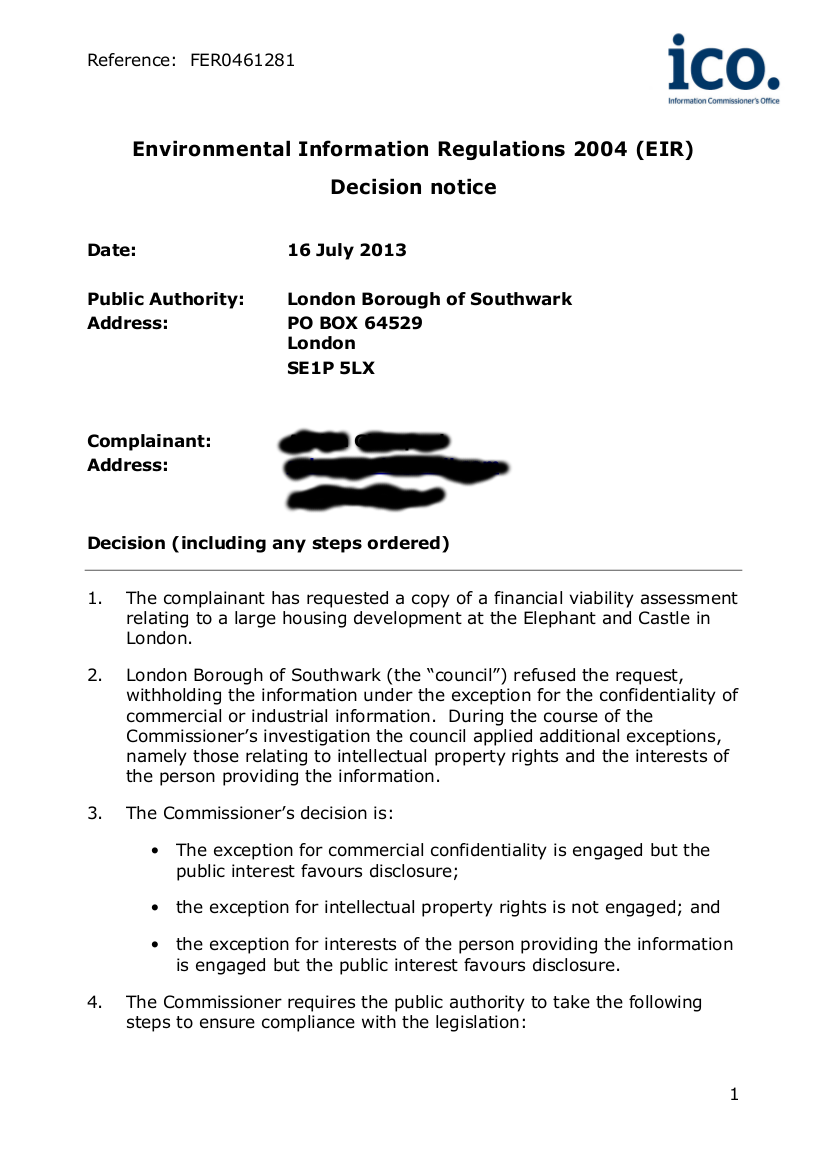 The Commissioner refers several times to the high level of public interest in the development:

"In relation to the general public interest in transparency and accountability, the Commissioner’s general view is that, where this relates to planning matters, there is a strong weighting in favour of encouraging public participation and disclosure is a means of promoting this." (Information Commissioner's Report, paragraph 167)

He notes the press and television attention that the development has received, and considers that the focus of public debate and concern has been on the levels of affordable housing provision delivered by the scheme. Disclosure of the viabilty assessment would inform this debate and reassure the public that the council's decision to allow Lend Lease’s proposals to proceed were based on a correct analysis of the facts presented.

He also notes the concerns raised by various community groups and on websites such as Southwark Notes, 35percent.org, and Spinwatch.org.

The Commissioner also considered that the disposal of the land and its sale price were matters of "relevant public interest". He acknowledged the difficulties of obtaining best value in the current economic climate, and the argument that the council should be allowed to simply press on with the regeneration. However, he comes down on the side of what he calls a "compelling countervailing argument in favour of making this process as transparent as possible". He considers the "size of the redevelopment and the number of residents affected should provide a trigger for transparency and engagement with council tax payers"<[^5], and that the council should expect a "high level of scrutiny".[^6]

"The Commissioner notes that the scheme will not deliver the level of affordable housing required by the council’s own core strategy. In this respect alone, there is a significant public interest in demonstrating to the public that the council’s decision to progress with the scheme is nevertheless justified." (Information Commissioner's Report, paragraph 100)

Southwark can demonstrate its commitment to transparency and accountability by accepting the Commissioner's decision without further ado. There will be more viability assessments submitted in the future - local councillors, planning committee members, and members of the general public must be able to see them, particularly if council policy is not being fulfilled. It is ridiculous that the masterplan planning application was passed blind by the planning committee - it dents Southwark Council and Lend Lease's credibility, and local people's confidence in the regeneration process.

The South London Press reports that Southwark maintains that the assessment should not be made public and that it is "seeking further advice to determine its best course of action". Every one of our elected councillors - regardless of which party they are in - should say different and insist that the viability assessment is released without further delay.

"With the increasing outsourcing of public services and disposal of public assets to private partners or third parties, the Commissioner considers that there is a growing need for transparency and accountability in authorities’ decision-making and expenditure, not least because many parties which authorities conduct business with will not themselves be subject to the EIR or FOIA." (Information Commissioner's Report, Paragraph 171)