In China homeowners who stand in the way of new developments can refuse compensation if they are prepared to stay put in 'nail houses'. In Britain homeowners don't have that option - sooner or later they would have to accept whatever is offered, as the leaseholders on Southwark's Aylesbury estate are finding out. 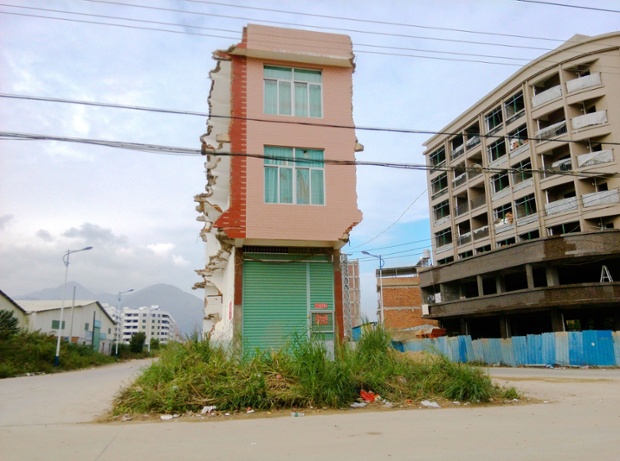 Last week Southwark Council served a Compulsory Purchase Order on 22 leaseholders, 12 secure tenants and 8 non-secure tenants whose homes are to be demolished in the next phase of the Aylesbury redevelopment. We reported briefly last year on the elderly residents objecting to the Compulsory Purchase of their homes during the previous phase of the scheme and how they were subsequently forced into litigation in order to obtain fair compensation for their homes.

The Council's justification for the CPO - its Statement of Reasons for making the order is full of the usual arguments: "the Aylesbury estate is amongst the most deprived areas in England"; "the built fabric is dated"; "it goes against good design principles"; "elements of its layout such as the raised walkways contribute to crime". Many of these arguments can be contested, for example the 2005 Council-commissioned structural survey declared the buildings sound and Southwark's own admission that the estate's crime rate is 45% below the borough average. Even if the Council's arguments are accepted it doesn't justify the Council's use of Compulsory Purchase powers against these residents.

One difference between this CPO and that of the Heygate is that it has been served not just on leaseholders but also on council tenants. The Heygate's 1,000 tenants were instead removed from the estate under the Landlord & Tenant Act with the help of 198 Notices to Quit and 4 eventual evictions. Whatever the procedure used, the Council is obliged to make secure tenants an offer of alternative accommodation. Non-secure tenants aren't so lucky: under the Aylesbury CPO there is no guarantee of any offer at all.

Leaseholders will have to rely on their compensation to buy a new home in the area. We know from the two cases that recently went to the Lands Tribunal that this is woefully inadequate with offers of just £85k for a 1-bed and £165k for a 4-bed flat. While current leaseholders are being offered a pittance, 2-bed new-build flats in the completed phase 1 Aylesbury development are being sold for £490,000.

It is difficult to understand this when Southwark should be getting plenty of money from the sale of 28.5 hectares of prime central London real estate. It got £20m for the sale of its nearby Manor Place development site to Notting Hill Housing (£11.8m per Hectare); on this comparison the Aylesbury site could be worth a staggering £330m.

Aylesbury leaseholders are being offered shared ownership options on the nearby Elmington estate regeneration, but this is on very unfavourable terms as shown by submissions from leaseholders to the Council's recent Overview and Scrutiny Committee meeting.

Aylesbury Leaseholders have formed themselves into an action group and have released this press statement in their fight to get a fair deal. They have objected to the CPO and there is likely to be a public inquiry.