Just when we thought the Heygate pyramid had set the limits on misconceived artistic collaborations at the Elephant, we got wind of the latest 'triumphant elephant' sculpture proposal. According to documents posted on artist Sam Keil's website "the team responsible for the redevelopment of the Elephant and Castle district in South London have commissioned Sam to sculpt a major piece for a new public square". 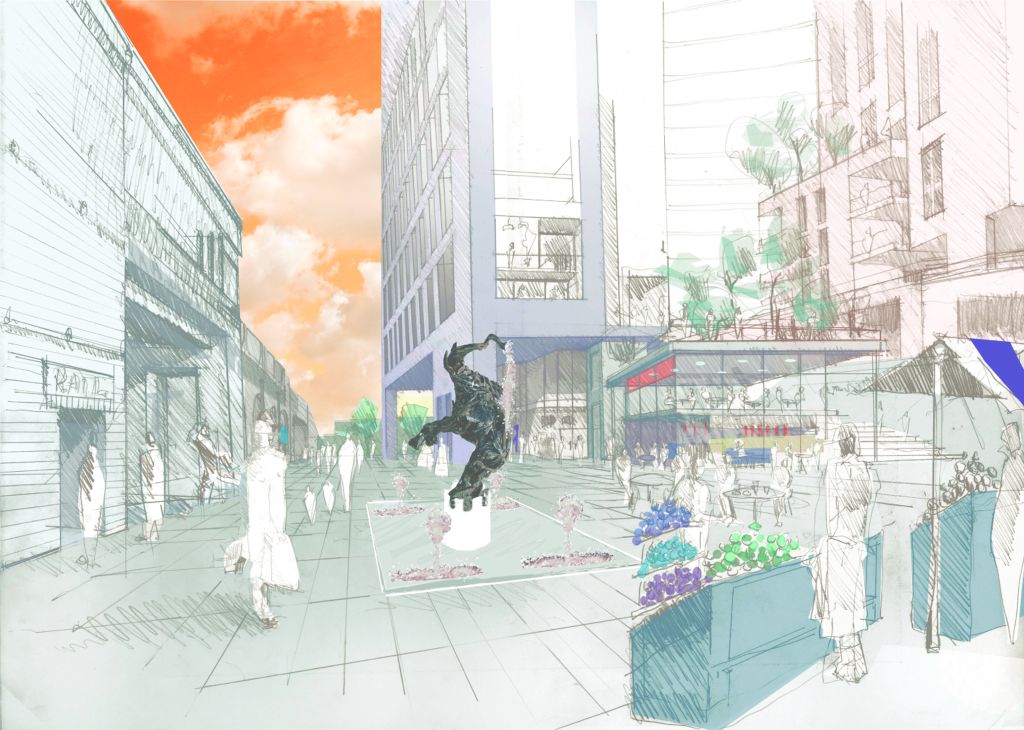 The sculpture proposed on the site of the former Heygate estate football pitch is to comprise a bronze elephant "standing on its hind legs on top of a tall castle tower, in the act of leaping into the air with its water-spraying trunk raised high in triumph." The project also includes "a series of small elephants which will be distributed as bronze key rings to the owners of the many new apartments associated with the redevelopment."

Sam has published the full proposal of the project on her website along with an example of her previous work at a St. John's Wood development, where - under the heading "The Effect of a Sam Keil Bronze on Property" - she claims that her sculptures enable developers to "charge whatever rent you like" . A letter from Southwark is also appended to her proposal in which Council bosses claim to be "very enthusiastic" about the idea, because it would be "well received locally" and that "the more elephants at the elephant the better!".

Sam works from her studios in Cambridge and Tuscany and has delivered other high-profile sculptures during her career. In 2011 she presented a bronze eagle to former BP Chief Exec Lord Browne at the Royal Academy of Engineering. Her eagle is claimed to signify a "symbol of power" in manifesting the desire to make the "UK the King of Nations again".

Sam claims her bronze elephant "`Phoenix' with water soaring from his trunk will be a new twenty-first century update of the well-known elephant motif for the area". We think it will be a tasteless and poorly thought-out marketing gimmick with little public value and a monument to how out-of-touch Southwark regen bosses are with local opinion.

Delancey's long-promised consultation on the future of the shopping centre has finally begun. Ex-deputy Council Leader turned development consultant Kim Humphries, could be seen buttonholing unsuspecting shoppers last Friday to get their views on the redevelopment. One of the key questions being put is: "Do you think that the whole of the shopping centre site should be redeveloped rather than refurbished?“ This can only be rhetorical, because as our friends at Southwark Notes point out - the decision to demolish the shopping centre has already been taken by Delancey. Southwark Council has also decided to 'insist' on demolition of the centre.

At a recent Walworth Society meeting, Delancey said that it hopes to complete the consultation and submit a planning application by May 2014. They listed 94 community groups of different kinds that they said they will consult. One group omitted from the list were the shopkeepers. When challenged, Delancey insisted that shopkeepers' views would be taken fully into account, but that another team of Delancey operatives would be talking to the shopkeepers at the same time as re-negotiating their leases. We are sure this twin-track approach will not inhibit shopkeepers expressing their views. We hear that leases currently offered for renewal are limited to 5 years with a 'break clause' in November 2016, which suggests that this might be the time that those who don't fit the profile of the new town centre will be leaving us.

Delancey is a private developer and a big one. It is registered in the British Virgin Islands and how Delancey turns this to good advantage has already been exposed in Private Eye and a Channel 4 Dispatches programme. It is run by Jamie Ritblat and funded by George Soros. Jamie is following in his dad's footsteps - former British Land chief executive Sir John Ritblat - and is a donor to the Tory party. He courted controversy in 2011 when he snapped up the Olympic Village at a knock down price of £557million – £275million less than the taxpayer paid bailing out the previous owner - Lend Lease. Standing behind Jamie is the richest man in the world, George Soros. Mr Soros is notorious for nearly bankrupting the Bank of England and tipping the rest of us into poverty. Mr Soros claims to be proud of the fact the he made £1bn selling sterling that he didn't own. We obviously need have no fear about the future of the shopping centre development not being in good hands.

Shopping Centre who's who?

The shopping centre was originally to be redeveloped by Lend Lease under the Regeneration Agreement signed in 2010 with Southwark Council. St Modwens (KPI) was the owner of the shopping centre at that time. A year later it signed an agreement with Southwark Council and another, tripartite agreement with both Southwark and Lend Lease for the redevelopment of the centre[^1]. These agreements have been kept confidential[^2]. St Modwen then sold the site to Delancey & funding partner APG in 2013. The question then, is what is the current contractual relationship between Southwark, Lend Lease and Delancey for the redevelopment of the shopping centre? It appears to be another instance where Southwark Council has several hats: development partner; public authority with CPO powers; author of enforcer of planning policy, and as former Heygate residents know it does not always resolve these competing roles in the best interests of local people.

The Coronet is taking no chances with its future, it has launched the 'Save the Coronet' campaign and has gained impressive support from a long list of distinguished artists who have performed there. A sizeable part of the shopping centre site is occupied by the Coronet - a music and event venue, it has also been a cinema and music hall dating back to 1872 and is a popular local institution. Welcome to 'Social Life' -a social enterprise based on the Pullens estate. Funded by the Young Foundation, their mission is "to reconnect placemaking with people's everyday experience and the way that communities work." They have turned their attention to the Elephant & Castle and the impact of the regeneration on local people. The say this: "we are carrying out an independent research project to understand how traders in the Elephant & Castle Shopping Centre are being affected by the proposed regeneration. We want to understand how the proposed changes are affecting people now and how they will impact on traders and customers and their businesses, livelihoods, friendships and local relationships in the future. We want to understand more about the Shopping Centre’s social value."

Last but not least, our friends at Southwark Notes are organising a day of excitement and interest on Sat 19th July. The day begins with an anti-gentrification walk followed by 'Soundscape' - "an immersive multimedia sound piece investigating community and gentrification" ending with the screening of 3 films including the much-awaited 'Concrete Heartland' - a film "exposing the social cleansing of the Heygate Estate in Elephant and Castle."