Southwark Council has had its feathers ruffled by both the Guardian and the BBC lately. A Guardian article by Oliver Wainright uses the redevelopment of the Heygate estate as an example of how developers are 'exploiting planning authorities and ruining our cities'.

Southwark Council has posted a press statement 'setting the record straight', in which it claims it will receive "phased payments as the scheme progresses" and this will amount to "hundreds of millions".

It is true that there will be phased payments amounting to £50m (£46m for the main site + £4m for the Rodney road site) - this figure is now well known from the leaked Regeneration Agreement, but getting the "hundreds of millions" of pounds depends upon the so-called 'overage' or 'super-profit' and how much this will be, if anything, won't be known until the project is completed in 2025. 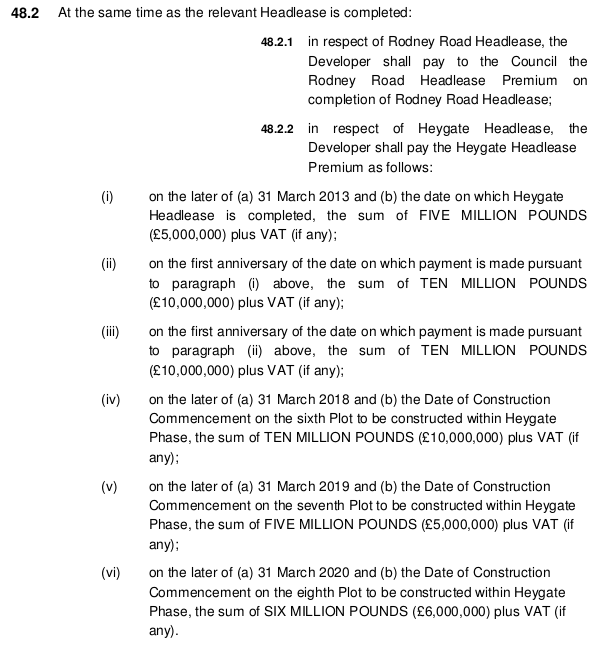 The overage will be what is left over after building costs, a 2.6% management fee and 20% priority developer return is deducted from the total sales revenue and it will be calculated according to Lend Lease's financial model, as detailed in a 3000 page spreadsheet known as Appendix 22 of the Heygate viability assessment. This complicated accounting process is entirely under Lend Lease's control and while the Council has the right to inspect the financial model, this may not guarantee the expected overage windfall as the Barangaroo Delivery Authority in Sydney Australia is finding out to its cost.

Any reckoning of the gain due to Southwark must also take into account the £65m[^1] it has spent on Heygate decant costs plus an unquantified amount of public money devoted to regeneration since the wider E&C scheme was conceived, starting with the £25m Single Regeneration Budget (SRB) funding received back in 1999.

On top of the Guardian’s Heygate story the BBC has taken up the plight of Aylesbury leaseholders being 'forced out of the city', with an online article and televised reports on both its London News and Inside Out programme on 8th Sep. Inside Out did not think much of the paltry amount of compensation leaseholders on the Aylesbury estate were being offered, particularly in comparison to the £340k cost of one-bed properties in the area and described the situation as 'the Right to Buy dream turned sour'.

Southwark again 'sets the record straight' and insists that offers such as £85k for a 1-bed flat are based on "actual market evidence of properties being sold on the Aylesbury estate". This method of basing valuations on the sales prices of other properties depressed by the prospect of demolition has been criticised by the Lands Tribunal. Southwark Council's valuers are also pretty imaginative in the way they gather 'market evidence', using a 1-bed property which had been illegally converted to 4 beds flat as the basis of the compensation for one unfortunate leaseholder. The derisory compensation offered to Aylesbury leaseholders is in stark contrast to the abundant profit that the builder of the Aylesbury redevelopment Barratt has just announced.

The Guardian and BBC stories reflect a wide-spread public view that developers and housebuilders are making big profits at local people’s expense and taking Southwark for a ride (an online petition demanding an investigation into the Heygate development has gained over 700 signatures in 3 days) and a couple of press releases from Southwark won’t change this view.