The Southwark Law Centre (SLC) has written to London Mayor Sadiq Khan asking him to respect Southwark Council’s decision to reject developer Lendlease’s plans to build a giant office block on the final plot (H1) of Elephant Park, at the Elephant and Castle. (Reports on the decision can be found on these links - SE1, Southwark News and the Australian Financial Review).

SLC sent the letter on behalf of objectors to the scheme, which was unanimously rejected by Southwark Council’s planning committee on the 4 Oct. The vote followed a four-and-half hour meeting, including a 50-minute closed session, when the committee considered the application in the absence of the public. The scheme has now been referred to the Mayor, who has the option of allowing the decision to stand or ‘calling in’ the proposal, to make a decision himself. Objectors (including the 35% Campaign, the Walworth Society and local residents) fear that this could open the door to the office block being approved against the wishes of the local community. 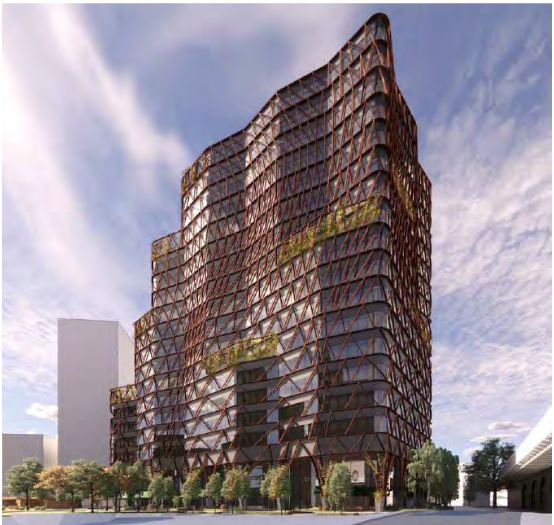 Harpreet Aujla, of SLC, says in the letter ‘It is hoped that the local, democratic process will be respected, especially so given the history of regeneration and community input in Elephant and Castle.’ The letter points out that the application was rejected because the ‘excessive height, massing and bulk of the application would cause harm to the character and appearance’ of the local area and that it ‘would cause unacceptable harm to the neighbouring amenity due to loss of daylight’, contrary to Southwark's planning policies and the Mayor's London Plan.

Objectors were also worried about the knock-on effects of a proposed health hub, which would have occupied part of the office building. The letter says that ‘would have impacts for health care delivery for the whole of Walworth, which were not properly addressed by the application.’ The planning committee heard how the hub would be instead of affordable workspace and would serve those using the Princess Street and Manor Place surgeries. SLC has asked the Mayor for a full public consultation on what this might mean, before any planning permission is considered.

Princess St Surgery and Manor Place Surgeries at risk of being replaced rather than complemented by the new health facility.

The SLC letter also takes up various green and sustainability issues, some of which had been raised by the Mayor's own officers, such as 'a lack of rainwater harvesting and a green roof' and 'issues with sustainable drainage strategies'. Nor was there evidence of a net biodiversity gain from the scheme, with a diversity loss, should the wildflower meadow presently on site disappear. The proposed scheme also includes no renewable energy or decarbonised heat sources in the design and comes with no proposals to decarbonise the estate, in line with the Mayor’s London Plan 2021 policies.

What we think...local schools and 'bright shiny buildings'

The Mayor must uphold Southwark's decision to reject Lendlease's proposal for an outsized office block.

The planning committee resoundingly rejected the application on the good grounds of its huge size and the impact that would have on the local area and residents and the Mayor should support this. A health hub would be very welcome, but people need to know more about what this will mean for the future of Princess Street and Manor Place surgeries.

Decisions about the hub should also not be driven by the developer's ambitions and without consideration about the wider social impacts. The danger of this is well illustrated by the plight of schools in regeneration areas, many of which are facing closure due to falling rolls; the local headteacher of Victory Primary School, right next door to Elephant Park, has little doubt about the negative impact on her own school of 'bright shiny buildings', with little real affordable housing; a giant office block will not improve the situation.

Elephant Park is notorious for only delivering 25% affordable housing, not 35%, and only having 100 social rented homes (whose rent is being investigated). The justification for this is a viability assessment that is 10 years old and based on 220 fewer units than have actually been built, so the case for a new assessment to see whether more affordable housing can be provided is obvious.

We know how easily, though, such assessments can be manipulated to reduce affordable housing, so they cannot be relied upon. Lendlease should simply use H1 to build housing and make up the affordable housing shortfall from the rest of the development. There is no reason that this could not also provide a health hub too, properly developed and designed to meet the needs of the local community. There should also be room for the affordable community space which is also lacking elsewhere on Elephant Park.

Could Southwark buy the H1 land?

Alternatively, given that Lendleases are treating plot H1 as surplus to Elephant Park's housing requirements, Southwark could consider taking over H1 themselves, to build council homes, towards meeting its 11,000 council homes pledge. According to Land Registry records it looks as if Southwark still retain freehold ownership of the Elephant Park land, with the the final plot valued at £6m, according to Southwark's Regeneration Agreement with Lendlease: Southwark recently budgeted £101.146m to buy land for council housing, so forgoing £6m (plus VAT) to secure H1, with the capacity to build around 300 homes , could be a deal worth considering.