David Cameron's announcement that the government will be regenerating 100 council estates across the country, should send a chill down the spine of every council tenant and leaseholder in the country.

This, combined with the Housing & Planning Bill that's being railroaded through parliament, has been interpreted by many as the end of social housing. It is hard to disagree.

Here in Southwark, we know how these estate regenerations - full of promises of replacement 'social' housing and rights to return - usually end up. The Heygate is the most notorious example, but it is just one of many:

That's a net loss of 4,275 social rented homes as a direct result of Southwark's regeneration schemes to date and the GLA has predicted that Southwark will lose 2,051 social rented homes as a result of schemes in its current pipeline (far more than any other borough). In addition, we can't even be sure that the replacement social rented housing provided isn't actually affordable rent or won't morph into it - see the CPO Public Inquiry, our corporate complaint and this local news article for evidence of this. We have also compiled a list of 42 developments where we believe such tenure switches have taken place, comprising a total of 1139 homes approved at planning committee as social rent but provided as affordable rent.

Despite widespread criticism, Southwark is ploughing ahead with further regeneration plans, largely informed by a Savills 'Asset Performance Evaluation' undertaken last year (the assets being our council homes). It goes on to recommend a number of additional strategies to achieve the desired "improvement in business plan capacity". These include increasing rents, albeit "subject to the Council's policies on rents .. and plans to explore devolved management" - (a practice that we argue is already being introduced via the back door[^3]).

Savills's evaluation informed the Council's 2016 Housing Asset Management Strategy, which explained that "11.5% of the stock (4,167 units) has a Net Present Value which is below zero" located on what it terms 'High Investment Needs Estates'[^1] - for which it is recommended that "options be explored with residents as to whether a small scale redevelopment or regeneration scheme may deliver better outcomes than direct refurbishment."[^2]

The publication of the Savills report and asset management strategy understandably created concerns amongst tenants living on the "poorly performing" estates in negative value homes. In response, the Council's Housing Boss tried to reassure people by explaining that options will be considered on a “case by case basis” and that only “in a small number of cases it may mean demolition.”

We blogged about this in December and noted that Savills is just as happy selling off Southwark's high-value assets, as it is identifying those low-value assets that could be candidates for demolition. Savills also prepared the notorious viability assessment that allowed Lendlease to slash the social rented housing on Elephant Park (the New Heygate) to just 82 social rented units.

So it comes as no surprise to learn that Savills are the brains behind David Cameron's big idea of 'regenerating' 100 council estates, supplied by its Cabinet Office report 'Completing London's Streets'. The report happens to feature a photo of a Southwark estate, the Brandon, to illustrate how the estate's generous green spaces constitute a "housing typography" that is "deeply inappropriate for current and coming decades". 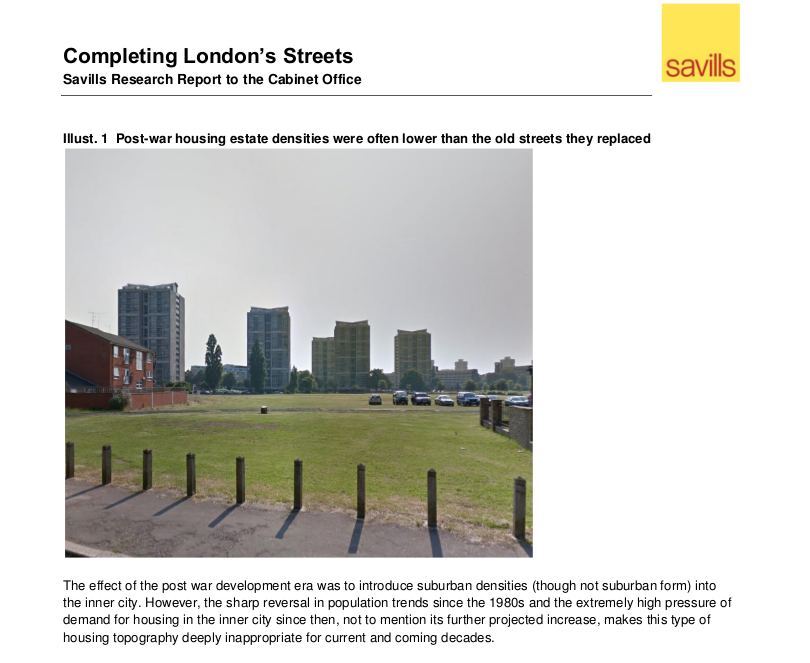 The report also uses the Nelson/Portland estate on East Street in Walworth as one of 6 case study sites to expound its ideas (Site C). Two other estates identified by the 35% Campaign are the Glyndon estate in Woolwich (Site B) and the Ampthill Square estate in Camden (Site A). The estates are not easily identified in the report, they are not named and have been disguised by flipping and rotating their layout plans. 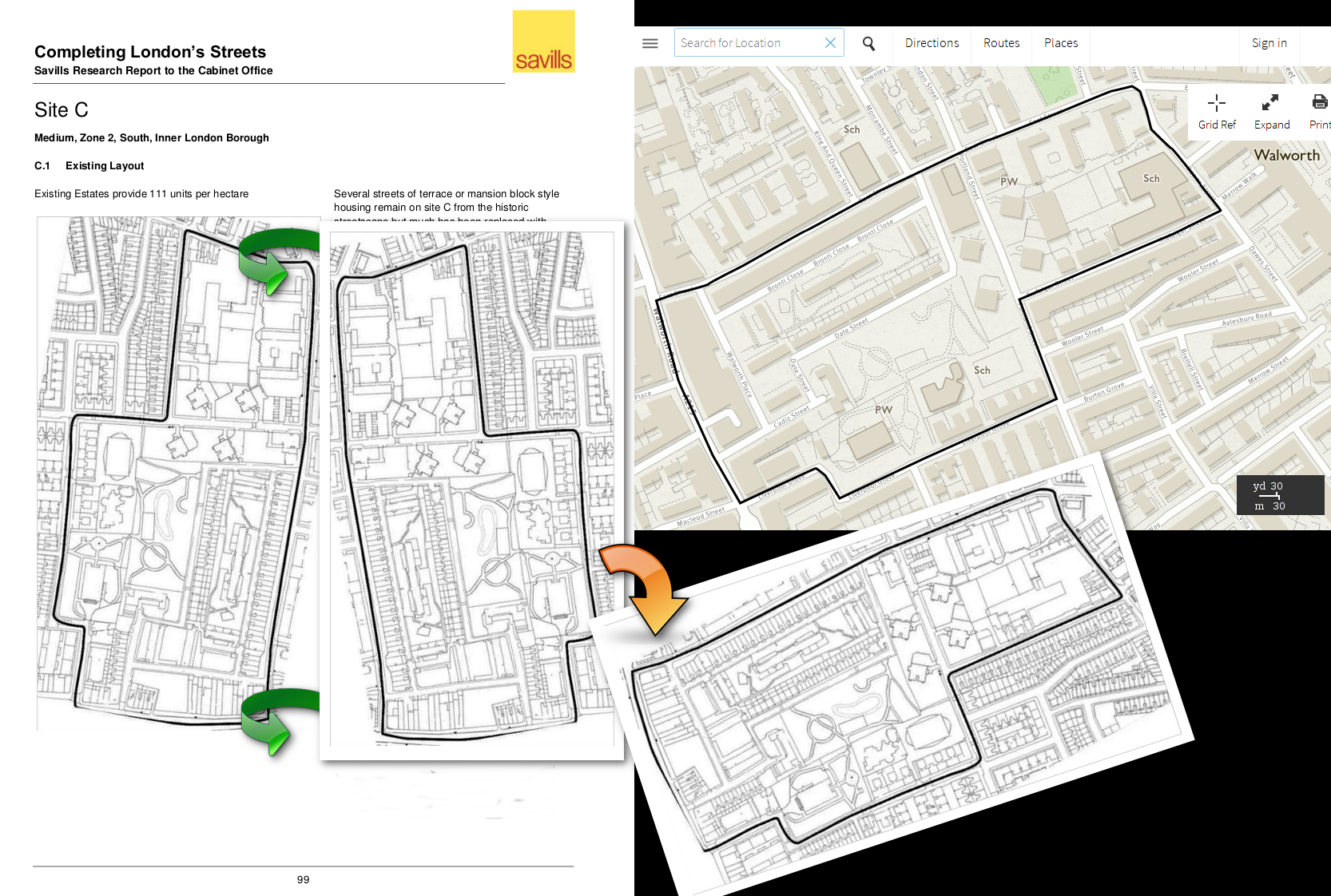 Below Savills explains that their case study estates "do not represent any current, existing or proposed scheme", so the residents of Nelson/Portland, Glyndon and Ampthill Square estates can rest easy in their beds...

Savills 'Completing London's Street's report and Cameron's proposals echo many of the proposals put forward by Labour Lord Andrew Adonis, in his 'City Villages' paper published earlier in the year. We blogged in march about Adonis's 'City Villages' and how they constituted a manifesto for the destruction of council estates. We also showed how he received support from Southwark Council leader Peter John, who wrote a whole chapter of the paper, holding the Heygate regeneration up as a successful model and blueprint for the manifesto.

Councillor John is a full subscriber to this cross-party 'sink estate' rhetoric. He wrote an article in support of David Cameron's estate demolition proposals in Jan 2016, arguing only that Cameron's plans weren't ambitious enough and that more government funding should be allocated to the programme. In the article he describes the Heygate & Aylesbury estates as "symbols of inner-city neglect, with crime, antisocial behaviour, health inequalities and unemployment the only things that flourished there". He added that "both had become hard to let to council tenants, and reinforced poverty, crime and inequality" and concluded that in any case, "most brutal estates do not make the best use of the land they occupy."

Councillor John has long been echoing these stereotyped opinions of council estates which seek to justify the demolitions. In a radio interview he described the Heygate & Aylesbury estates as a "byword for social failure, crime and anti-social behaviour - with all the sorts of problems that people are talking about being the problem with massive council estates."

In a local news interview he claimed that "brutalist architecture wasn’t conducive to building a successful economic community". He evidenced this claim with an anecdote, in which he described local MP Harriet Harman's visit to the Aylesbury estate: "Harriet and a councillor were in a lift with a man injecting drugs in his penis. That’s not the sign of a successful community".

On his blog he repeats the same criticisms of council estates touted by the Tories and their proposed replacement by traditional street patterns: "The answers which the Aylesbury provided were soon overshadowed by the problems which were inherent in the design of the huge monolithic and brutalist blocks. The previous street pattern was replaced by long corridors and above-ground walkways, which paid little regard to the human desire to travel at ground level and have neighbours and communities within easy reach."

There is an alternative

If local communities are to be protected then regeneration has to mean something other than state-sponsored gentrification championed by the property services industry, which makes great profit from it in every which way.

Refurbishment needs to be considered. And if building new council homes is costing £383k each, when homes on 'high investment needs estates' can be brought up to Decent Homes Standard for a fraction of this, then there is no reason not to do that.

The council's blanket response to criticism of its council estate clearances, is that it has embarked upon an ambitious plan to build 11,000 new council homes (over the next 30 years).

However, in the two years since the Council launched this ambitious programme it has built a total of just 152[^4]. Meanwhile, according to GLA data during the last year alone the borough has seen a net loss of 170 social rented homes[^5].

This figure doesn't even include those lost through Right to Buy during the year and according to figures quoted in this article the council is predicted to lose 9,000 council homes through RtB during the next 30 years.

Southwark's own consultation on its programme to build 11,000 new homes made it clear that the programme will involve the wholesale redevelopment of existing council estates: In addition, the Council has set up a Special Purpose Vehicle (SPV) - Southwark Housing Company Ltd - a separate limited company that will own and manage the 11,000 new 'council' homes. This has led to fears that these will be let at higher rents, as is the case where other councils are using SPVs to build 'council' homes - i.e. LB Lambeth.

[^3]: See the Council's response to this FOI request, which confirms it is charging more than twice the average council rent on properties located within regeneration schemes. See also this article confirming that the Council has set up a private company to manage its new 'council' homes.